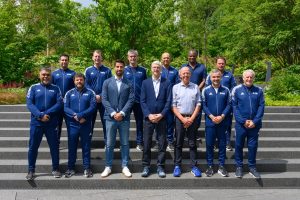 “Anyone can be a coach, but telling someone exactly what they have to do, exactly how to do it and even telling them when to do it, that takes knowledge, experience and education. That’s why it’s very important that we focus on the quality of education.”

Those words belong to Arsene Wenger, who knows what he is talking about when it comes to the qualities needed not just to be a coach but to be a good coach. Appointed FIFA Chief of Global Football Development in November 2019, the Frenchman has made high coaching standards one of his priorities.

It was with that topic in mind that FIFA’s Coaching Development Programme experts met on June 27-30 in Zurich for a seminar devoted to the coaching competency framework. Chairing the event was Wenger, with the support of FIFA Technical Director Steven Martens and FIFA Head of Coaching Development Branimir Ujevic.

“FIFA wants to give every talented player a chance, a goal that involves giving all of them, regardless of their level, access to good competitions and to good coaches who can guide them,” said Martens, explaining the reasons behind the seminar.

“It’s important that member associations are each able to develop their own coaches and manage their own training programmes,” he added. “That’s why we’re holding this workshop, which is specifically focused on how we can develop better coach educators around the world.”

As Wenger said in the ground-breaking study embarked on two years ago, talent development is dependent upon good-quality coaches being in charge of youth teams, and upon education and the knowledge possessed by coaches. “We’ve seen that the countries that excel at football are the ones with the best training systems and the best coaches,” he said. “That’s why we need this programme – to make football more competitive around the world.”

Speaking at the event, Scott O’Donell, an Australian coach who has worked extensively in south-east Asia, said there was a need to make coach education available around the world: “Lots of the coaches I’ve worked with in India, Cambodia, Malaysia and Singapore are still in India, Cambodia, Malaysia and Singapore. Maybe they lack the confidence to leave. With the Coaching Development Programme, they will have the chance to work with other people in other countries, to develop a network and access opportunities. That can only be good for football in south-east Asia, because there is so much potential.”

With its five FIFA World Cup™ titles and lofty reputation for producing legendary coaches, you could be forgiven for thinking that the need for coaching development would not be high on Brazil’s list of priorities. Confounding that view, Mauricio Marques, the Brazilian Football Association’s (CBF) Training Coordinator, said he needed no convincing about the usefulness of the programme: “When we first started thinking about entering the programme, we thought: ‘We’ve got five stars on our jersey and we bring through the best players. Why should we get involved?’

“Then, when we joined the programme, it caused us to stop and think. Even when you’re at the pinnacle of world football, you always need to think about how you can improve. We always strive for excellence. It’s one of the things that motivates us.”

Marques is aware, however, that quality coaches cannot be confined to the top of the pyramid, even in the world’s most successful footballing nation, with its 210 million fans: “It’s our objective at the CBF, with the support of FIFA, to make that quality trickle down, to make it more democratic, and make it more accessible on every pitch of ours.”

Drawing on some figures to back up his point, he said: “Let’s imagine that we have 20 coach educators giving ten or so courses across the year and that there are 40 coaches on each course. Those educators would be reaching out to 400 coaches a year. Let’s say they’re working with 100 youngsters a year, then we’re talking about 40,000 children a year, in Brazil alone. If you put it like that to all the confederations involved in FIFA’s Coaching Development Programme, it’s huge.”

A former player and coach turned educator and consultant, England’s John Peacock stressed the value of the development programmes. “It’s a question of both quantity and quality,” he said. “We need to keep working on the quality of coaches and, even more importantly, on coach educators, who are the people developing these courses and working with players both young and adult, male and female. Ultimately, the aim is to try and develop the game in every country and take it to the next level.

“What FIFA is doing in supporting educational programmes around the world is really positive. The big task facing us is to get these messages out there, and to get support through these programmes so we can develop the best players and coaches for the future.”