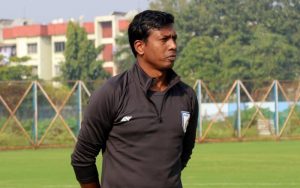 Indian Arrows head coach Venkatesh Shanmugam believes that it will be a good opportunity for his charges to gain some crucial experience of playing against quality opponents George Telegraph SC in their second match of Group C of the ongoing 123rd IFA Shield.

The All India Football Federation’s (AIFF) developmental is set to face off against George Telegraph at the Sailen Manna Stadium in Howrah, on Wednesday, December 9. The match kicks-off at 1.30pm IST.

“George Telegraph are a tough team to play against. They’ve got many well-known players in their ranks and the club has had the experience of playing in the CFL for a long time,” Venkatesh said on the eve of the match. “So, it will be a difficult proposition but I hope the boys will use this match to gain more experience.”

While the Indian Arrows prepare for their upcoming encounter, Venkatesh sees this as an invaluable opportunity for the boys to pick up some experience of playing against a quality senior team.

“For the boys right now, it’s all about getting the experience of playing senior football. I have great hopes from them. We have some very talented boys in our team, but of course, there’s a lot of room for improvement,” stated Venkatesh, who is also the assistant coach at the Senior National Team. “This experience of playing in the Hero I-League and IFA Shield will help these guys in the future.”

Aided by the Government of Odisha, the Indian Arrows had assembled in Bhubaneswar last month for a brief camp, before travelling to Kolkata ahead of the IFA Shield, following which, the side earned a point from their first game of the season against Southern Samity, which ended 1-1.

“Getting to train in Bhubaneswar was extremely helpful and that camp gave us a great foundation to prepare physically and strategise for the IFA Shield and upcoming I-League. We are grateful to the Govt of Odisha for arranging the camp under challenging circumstances and lending their support. Their treatment and caring for the team was very good as they arranged for all the safety measures in the pandemic situation,” stated Venkatesh.

“Against Southern Samity, the boys played against a senior side with foreigners for the first time. Right now, every match is a good chance for the boys to learn from their mistakes,” the former Blue Tigers’ captain quipped.