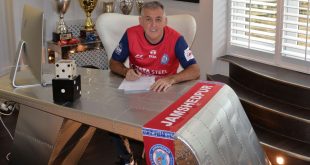 VIDEO: Owen Coyle gets candid about his thoughts & plans for Jamshedpur FC!

Chennaiyin FC co-owner Vita Dani said, “We would like to congratulate Mr Praful Patel, Mr Kushal Das and their whole team for the fantastic work they have been doing at the AIFF Elite Academy. Last year we signed five graduates from the AIFF Academy and all five have shown great improvement over the last 12 months with Jerry (Lalrinzuala) and Anirudh (Thapa) also going on to play for the India senior team. We thank AIFF and hope to continue the development of the boys in the coming years.”

AIFF general secretary Kushal Das said, “AIFF’s structured youth development and the Academy programme has been the supply line not only to the Senior National Team but also to various Indian Clubs. The trend continues as Chennaiyin FC have now signed six of our Academy cadets. I wish them all the best in their future endeavours and also thank Chennaiyin FC for showing faith in our cadets to help them mature into better professional players.”

Chennaiyin FC technical director of youth development Syed Sabir Pasha added, “They are all teenagers but at Chennaiyin FC age has never been a hindrance. The door is open to each one of them to stake a claim for the senior team. Our head coach John Gregory will be following their progress closely.”

Mitra, Sanglura, Boban and Rohmingthanga have all represented India age group teams in various international matches while Renthlei and Zonunmawia are part of the current India Under-19 team that is preparing for the upcoming SAFF U-19 Championship and Asian U-19 Championship qualifiers.