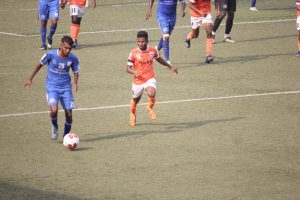 Down by a player in the second half, 10-men Dempo Sports Club held Sporting Clube de Goa to a 4-4 stalemate in the Goa Professional League.

A first-half hattrick by Uttam Rai and a goal by Desmon Perreira, gave the Eagles the goals at Duler Stadium in Mapusa in a feisty fixture for the title.

The Eagles who were playing their second last game of the league were the designated away team for the evening and made only one change to their previous starting eleven; Kritikesh Gadekar slotted back in midfield after serving a one game suspension for Ariston Costa.

Starting the slower of the two teams, the boys found themselves trailing the matchup as early as the fifth minute of the competition when Gaurav Kankonkar put the home side ahead after pouncing on a loose ball inside the box. The quick free-kick from the home side pivotal in catching the Eagles defense off guard.

Having conceded so early in the game, the onus was on the boys to show up and stamp their authority on the game and they did just that! Spotting an opportunity for a through ball in the eight-minute, captain Shallum Pires found Uttam Rai in acres of space and played in the perfect long ball for the rushing striker. Making no mistake with the run and then the finish the striker displayed why he is considered one of the best in the league.

As the Eagles slowly climbed into the ascendency and began to dictate play, Uttam Rai found himself in the thick of things yet again, His industry and Interplay with Pedro Gonzalves earned the boys a penalty in the tenth minute of the game as he stepped up to take the resulting spot-kick to double his and Dempo’s tally for the evening.

Having been played at an incredible pace, the game took another turn, in an astonishing five minutes of play before the first half water break.

Two goals each from Uttam Rai and Desmon Pereira added two more goals to the Eagles tally with Sporting Clube de Goa pulling one back through a penalty. Desmon Pereira with a header from a Uttam Rai cross and Uttam Rai with a tap in finish from a Desmon Pereira flick earned the boys a well-earned cushion as the duo was proving too much for the home team to handle, with Uttam Rai completing his first half hat trick in less than thirty minutes, as the Eagles went into the tunnel leading the competition 4-2 in their favour!

After the restart, the Eagles who seemed to be cruising at the 60th mark were dealt a triple blow when Kiritikesh Gandekar was given his marching orders following a second bookable offense! The card and then two quick goals turned the entire game on its head as the boys were now forced to counter on the break for the decisive fifth goal.

Pushing hard for the lead even with the man disadvantage, Dempo first brought on Ariston Costa for Richard Cardoz and later Beevan D’Mello for Danstan Fernandes as the team looked to reallocate their manpower into the attacking third of the field and even came close through a Suraj Hadonkar free kick late in the half, but unfortunately it was not meant to be as the game ended 4-4 at the Duler Stadium.