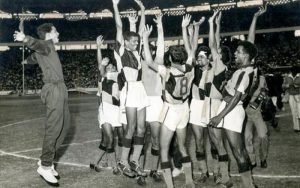 There was a doubt lingering over India’s participation because of shortage of foreign exchange but senior Congress leader and IFA President Atulya Ghosh took up the matter with the then Prime Minister Jawaharlal Nehru and Finance Minister Morarji Desai, and eventually, the team boarded the flight to Jakarta.

India got off to the worst possible start as they lost to Korea in the opening encounter of the Group B. But thereafter, Head Coach Syed Abdul Rahim made some changes, and India never looked back.

India defeated South Vietnam in the semis, who had several French players in their line-up at that time. In the group league match against Thailand, central defender Jarnail Singh got injured and his head was heavily bandaged. But as he stayed indispensable in India’s plans, he was played as a centre forward in the semi-finals and the final, and he scored a goal each in both the matches.

On the evening of 4th September 1962, the Senayan Main Stadium in Jakarta was jam-packed with nearly 1,00,000-strong Indonesian crowd cheering for Korea Republic. But the Indians had their support too in the stands. Any guesses? Strange as it may sound, the Pakistan Hockey team cheered for India.

The hostile atmosphere acted as a motivation for the Blue Tigers. PK Banerjee gave India the lead in the 17th minute before Jarnail (Singh), who was playing with four stitches on his forehead, doubled it three minutes later.

“There was pin-drop silence at the stadium when we went 2-0 up,” recalls defender Arun Ghosh. “Though Korea Republic scored a late goal, goalkeeper Peter Thangaraj saw off the danger till the end. The animosity against the Indian contingent was so high that hardly anyone came up to congratulate us after the match,” Ghosh, an Arjuna awardee said.

That was also the first time when the Indians, in their effort to perfect the art of defending, changed the perception of defending. “When we started to play as a defender, our aim was primarily to clear the ball and avert the danger. But Rahim-saab changed the perception,” Arun Ghosh averred. “Rahim-saab taught us that attack starts from the goalkeeper. He taught us the nuances of ground-passing and taking the game forward individually. The entire vantage point was changed and soon the results were highly positive.”