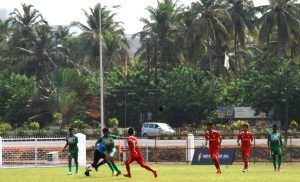 The first half kicked off with both the teams showing some skilful moves. However the Pune outfit were clearly the better of the 2 sides as it took them under 10 minutes to crack the Salgaocar defence. Ishan was able to beat custodian Antonio D’Silva as a result of a clever through ball from his side. The Greens had a few good goal-ward attempts via Ribhav Sardessai, Fhezer Gomes & Levy Pereira but were denied by the opposition’s defence while their custodian Deepak Saravanan pulled off some good saves. As the game drew close to the half-hour mark Laitonjam doubled the lead as he received the ball from a throw-in & sent a scorcher from just outside the box. The 3rd goal of the day was a result of a miscommunication among the Greens defence which Laitonjam capitalised on as he sent the ball into goal. The Pune side were in the driver’s seat at half-time as the scoreboard read 3-0 in their favour.

In the second half the Salgaocar lads seemed to have pulled the socks up as they had a slight shift in positions when Aaron Bareto was sent up to strike. This seemed to put the visitors on the back foot as they cracked under the pressure to concede a penalty which Ribhav failed to convert. The final goal of the game was scored by substitute Gulam as he cleverly dodged the Salgaocar defence & get the 4th goal past Antonio. The game ended much to the relief of a valiant Greens side as Pune FC walked away with a 4-0 victory.