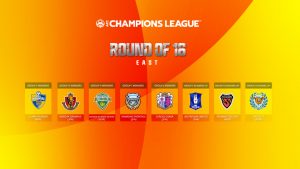 The 2021 AFC Champions League Round of 16 cast was finalised with the conclusion of the East Group Stage on Sunday.

After 60 thrilling matches played in Bangkok, Buriram and Tashkent, the AFC Champions League (East) Group Stage came to a close with eight teams joining the West Zone’s Round of 16 cast.

The Round of 16 (East) ties will see a bumper clash between defending champions Ulsan Hyundai FC of South Korea and Japan’s Kawasaki Frontale, with the teams having won Groups F and I respectively.

Japan’s Nagoya Grampus – the Group G winners – will face Daegu FC, who defeated United City FC of the Philippines to finish runners-up in Group I. The South Korea side will be appearing in the Round of 16 for the first time.

Two-time champions Jeonbuk Hyundai Motors – the Group H winners – will meet Group F runners-up BG Pathum United, who advanced to the Round of 16 in their maiden appearance in the AFC Champions League group stage.

The fourth East Round of 16 match-up is between Group J winners Cerezo Osaka of Japan against Group G runners-up FC Pohang Steelers, the fourth team from South Korea to advance to the knockout stage.

The single leg Round of 16 ties are scheduled for September.