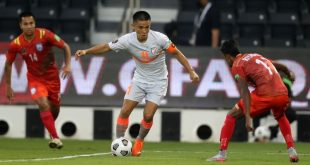 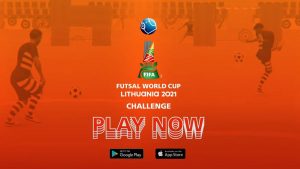 A new game celebrating the 2021 FIFA Futsal World Cup – Lithuania has launched today, bringing the fun and excitement of futsal’s premier tournament to the mobile phones of football fans and casual gamers worldwide.

Android and iOS phone users can take to the pitch at virtual versions of the Lithuania 2021 host venues that will welcome real-life futsal’s biggest stars in just over four months’ time, as well as some other, more unusual locations – from a tropical floating island to the chills of a ski slope!

With a swipe of the finger, players can curl shots past various obstacles and goalkeepers to score goals and win coins, with fun and informative facts about futsal and the FIFA Futsal World Cup popping up in between levels. Players can also create their own avatar and complete their unique look by selecting from a range of hairstyles and eye-catching kits, from dazzling designs to familiar national-team colours.

“The launch of this exciting new game, which was a hit with the FIFA Fan Movement during the testing phase, supports our strategic goal of leveraging technologies to improve the experience of fans,” FIFA Director of Marketing Jean-François Pathy said. “While opportunities to be pitchside have been restricted for futsal fans recently, this fun and entertaining game will give everyone, wherever they are in the world, a chance to discover more about futsal and get a taste of what to expect later this year.”

Lithuanian Football Federation General Secretary Edgaras Stankevičius added: “Lithuania is counting down the days until it welcomes futsal’s finest players for the first FIFA event ever to be staged in our country. This fun mobile game will bring the excitement of the FIFA Futsal World Cup to our young and tech-savvy fans and will build anticipation ahead of what promises to be a fantastic tournament.”

The real-world action will take place from 12 September to 3 October 2021, when 24 teams will battle it out for glory in the ninth edition of the tournament. All three Host Cities of Kaunas, Vilnius and Klaipėda are featured in the mobile game. FIFA Futsal WC 2021 Challenge is available for download from the Apple and Android app stores. For more information on the event, visit FIFA.com .

With just over two years to go until kick-off, preparations for the 2023 FIFA Women’s …