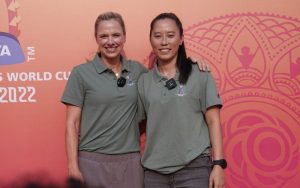 The upcoming 2022 FIFA U-17 Women’s World Cup – India is the ideal platform for the younger generations to showcase their talent and carve out a niche for themselves, according to former Indian captain Bala Devi, who urged her fellow countrypersons to attend and support the event. The upcoming tournament, set to begin on October 11, will be the first significant FIFA women’s tournament to be held in the nation.

“The FIFA U-17 Women’s World Cup will feature our U-17 girls, and I want to take this opportunity to invite our friends, parents, and fellow citizens to come to stadiums to watch the World Cup and support our players,” she said.

“Yes, of course, India hosting the FIFA U-17 Women’s World Cup is fantastic news for all of us,” the charismatic striker said when asked about the biennial event, before adding, “Furthermore, Indian players playing alongside some of the best young talents during the World Cup is significant because this event can serve as a springboard for their careers.”

Bala Devi backed the Indian team to do well in the tournament, saying, “I am confident that these girls will make us proud.”

She further showed her confidence in the team by adding that one day these youngsters will become icons for many. “This is a journey; when I was playing, I had players I looked up to; these players have their own favourites, and one day these U-17 players will be role models for the next generation,” Bala Devi said when she was asked about female role models in football.

The Indian Women’s Team has been drawn in Group A, alongside Morocco, Brazil, and the United States of America (USA). The 2022 FIFA U-17 Women’s World Cup – India is scheduled to be held across three venues – Navi Mumbai, Bhubaneswar and Goa. However, the Indian team will play all their group games at the Kalinga Stadium, Bhubaneswar.

@Arunfoot
Previous XtraTime VIDEO: Who could be East Bengal captain in ISL-9?
Next Jamshedpur FC announces launch of ticket sales for upcoming ISL 2022-23!