250 young footballers selected for 2nd round of DreamChasers talent hunt! 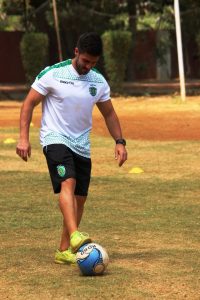 Around 250 boys between the age of 8-14 years (Mumbai – Western Region, South & Central Regions and Thane Region) have been selected for the second round of the DreamChasers, talent hunt project, launched by Proforce. The second round will be conducted on Saturday, May 14 and Sunday, May 15 at the Western Railway ground, Senapati Bapat Marg in Lower Parel, Mumbai.

These 250 youngsters were picked from over 1,000 boys who had attended the first round of selection trials conducted in the last two weeks at the Cambridge International School, Kandivali (500); Hiranandani School, Thane (200) and Cooperage ground (300). The trials were conducted under the supervision of Portuguese coach Ricardo D’Sousa, who is the Technical Director of Sporting Clube de Portugal. He is in the country to select 15 young football aspirants, who will undergo a five-year residential training under the guidance of coaches from Sporting Clube de Portugal and their academics (schooling) would also be taken care of by DreamChasers, at the Dr. Cyrus Poonawala International School in Kolhapur.

They will also be sent to the Portugal academy of the club for a fortnight every year. “Some of the children have shown good overall skills. From the groups of 10 kids in every session that went through the selection process, there were 2-3 of them in each group who were really good and stood out. I along with the local coaches did not find it difficult to pick out the talented ones for the second round,” Ricardo mentioned at the end of the first round of selection trials at the Cooperage ground. “In the second round the focus will be more of game skills and we will monitor the kids to see how well they adapt to match situations,” added Ricardo.

Keeping a close tab on the children were the doctors and Physios from Kokilaben Dhirubhai Ambani Hospital and Medical Research Institute who are the the official Medical partners for the Mumbai leg of the Dreamchasers Season-1.

All the selected children have to bring along their original valid date of birth proof (Aadhar Card, birth certificate, passport) and a self-attested copy of the same for submission. They have to also bring two
passport size photographs.