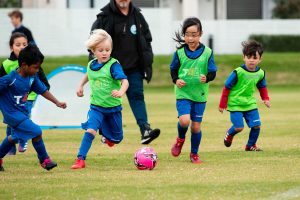 41 Member Associations (MAs) across Asia came together to celebrate the 2022 edition of the AFC Grassroots Football Day.

Join AFC Media as we highlight the exciting activities that took place across the Continent.

Football Australia celebrated the AFC Grassroots Football Day as part of their Female Football Week. The celebrations reflected Football Australia’s objective of bringing their diverse communities together and connecting Australia to the world through football.

The event included programmes like competitions organised by the MiniRoos Club Football, a network of grassroots football clubs in Australia. The occasion’s success has resulted in other stakeholders, such as Chelsea FC, expressing an interest in converting their introductory initiative into a MiniRoos Kick-Off programme.

After two years of one of the strictest lockdowns in the world, children made their way back on the turf while parents came out to support them, while all participants were given giveaways such as footballs, and backpacks.

The Bangladesh Football Federation (BFF) saw participation from over 500 students at the BFF Artificial Turf in Dhaka. The Federation also gave the chance to its other districts such as Satkhira, Sherpur and Patuakhali to be a part of the celebrations.

Children of various age groups, schools and football academies flocked to the stadium where small-sided games took place. The youngsters were divided into different groups, each of which was trained to specialise in one particular aspect of the game. The training session was followed by matches, which were particularly appreciated by the young girls.

Spread over nine venues across the country, the AFC Grassroots Football Day was a grand affair in Bhutan.

With a turnout of over 1,200 participants, the day was filled with a range of activities. The Changlimithang National Stadium provided the stage to engage over 500 children who took part in the Mini Dragons League 2021-22. The occasion proved to be a great opportunity for coaches, referees and volunteers to fraternise and promote community spirit in the name of the game.

The Bhutan Football Federation (BFF) placed special emphasis in giving back to the community by inviting officials from the Ministry of Health and Jigme Dorji Wangchuk National Referral Hospital to take a well-deserved breather from their busy lives to participate in a friendly match. Another interesting aspect of the celebration was a friendly match that was organised for monks of the Dodeydrak Buddhist Institute in Thimphu.

Alongside Thimphu’s impressive efforts, the BFF teamed up with institutes such as Wangsel Institute of Deaf in Paro to promote inclusivity by socially integrating differently abled footballers in the mainstream space.

The Chinese Football Association took a new direction in celebrating the AFC Grassroots Football Day by introducing the digital collection. This new-age approach was directed towards capturing the attention of the youth and igniting a passion for grassroots football.

The activity, “Football for All Challenge” is an innovative way of inviting participants to use their basic football skills to compete with each other with the objective of winning a limited edition “Grassroots Football Day” digital football token.

Its popularity has been demonstrated by the 26,666 digital footballs that have been given out. This remarkable experiment has helped in promoting grassroots to a wider audience.

Skill stations were set up with GFA coaches for participants between the U8 and U12 divisions. This was aimed at teaching children the four basic tenets of football – running with the ball, dribbling, passing and shooting. This was followed by small-sided games.

This year, to uphold the AFC’s principles of inclusiveness, the Football Association of Singapore (FAS) focused on adapted football. Hundreds of children, between ages four and 16, from ActiveSG Football Academy and SportCares were invited to join the FAS.

After a day of humbling activities, all participants were rewarded with water bottles or drawstring bags as keepsakes of the event.

The Al-Jalaa Stadium in Damascus was lit up by close to a hundred young boys and girls when the Syrian Football Association organised a Football Festival in conjunction with the Asian Day of Al-Baraem.

The festival was a fusion of learning basic skills and partaking in small-sided games and mini leagues. This was facilitated by the stadium being divided into four smaller stadiums where matches were played for durations of 10 minutes.

The young athletes enjoyed the exercises immensely and have expressed interest in taking part in more such events that the Association will hold in the future.

The Football Association of Thailand brought together almost 120 children, aged between six and 12 to celebrate the annual AFC Grassroots Football Day.

The participants were divided first into two large sections which were further broken down into smaller groups. Each of these groups, supervised by a coach, was made up of around 10 players. In total, four sessions were conducted.

The spirit of football bringing people together was enforced by almost 50 people who came forward as volunteers who took care of several duties such as registering the players and the setting up of hydration stations.

The boys and girls of the Sughd region had a field day celebrating the annual AFC Grassroots Football Day.

Children from boarding schools in the area, many of whom were orphans, were invited to take a break from their curriculum-driven schedules to soak in a day full of activities.

After a day full of fun and games, the participants were presented with T-shirts, bibs and balls as a token of appreciation for their participation.

The head of the Grassroots of the FFTL took on the responsibility of conducting the day’s activities. He was also assisted by other FFTL staff and local coaches from other municipalities.

The 100 participants were divided into 10 groups of 10 players where each group was made to engage in a different exercise. The mixed bag of activities was particularly enjoyable for the young children.

The Chinese Taipei Football Association, while making its way back to normal life in the post-epidemic era, still put their best foot forward to put smiles on the faces of their youth.

Close to 50 students, in the age groups of U10 and U12 were delighted to get the chance to play in a safe outdoor space and welcomed this positive change in their lives.

Coaches of the grassroots community came out in numbers to make the day memorable for the children and played an integral role in nurturing in them an interest in the game from a young age.

Previous India’s Igor Stimac: We are here, we are ready, & we will do it!
Next Chennaiyin FC sign young and dynamic Vincy Barretto!