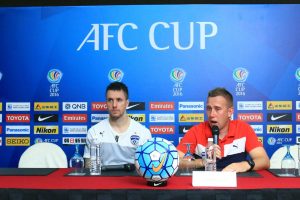 Bengaluru FC take on Cup champions Johor Darul Ta’zim in what is an inconsequential Group H tie of the AFC Cup at the Tan Sri Dato’ Haji Hassan Yunos Stadium in Johor Bahru on Wednesday but would do well to make the most of some valuable game time before the Round-of-16 fixture against Kitchee SC on Wednesday, May 25; after the Hong Kong side ran out 4-0 winners over Balestier Khalsa to top Group F.

Irrespective of the result on Wednesday, the Blues will finish second behind Johor as both teams have made the knockout stages and assistant coach Matthew Holland, who will be at the touchline following head coach Ashley Westwood’s suspension in the game against Lao Toyota, said the I-League champions would be looking to give a good account of themselves against what is more than just a very good team. “What’s always important to us is the performance on the day and what’s more important is the fact that we’ve qualified already. But we will definitely look to come and give a very good account of ourselves. We have to be appreciative of the fact that JDT are not just a very, very good team in Malaysia, they are the best. They are backed well and have a lot of support. Hopefully we can do well and get what we deserve on the day,” said Holland.

JDT have had a flawless Cup campaign winning all of their group games, conceding just three goals and are considered a very formidable side at home. But Holland said Bengaluru FC are aware of what they are up against. “The staff put in a lot when it comes to analysis of opponents. JDT are formidable at home just like a lot of sides are formidable at home and in football you can get a good result. What I can assure you is that we have done our homework as a group of staff, the players are aware of what they need to do and we’ll do our best.”

Bengaluru FC suffered a disappointing exit in the Federation Cup after being crowned I-League champions for the second time in three seasons but midfielder Michael Collins said the team has put the blip behind them and believes a good show against JDT will instill confidence in the dressing room. “Questions are being asked about the kind of side we will roll out given we have already qualified. But whatever side we put out, we’ve come here to try and get a result. Like Matt (Holland) said that we are probably up against the strongest team in the competition who might fancy themselves to win, so for us to come here and get a good result will hold us in good stead before our Round-of-16 game. Back home we won the League but didn’t advance the Fed Cup and there are a lot of players hurting in the team which is why we are keen to put it right and end the season on a high.”

On an all-time league record of 20 matches unbeaten in a row, Gokulam Kerala FC …