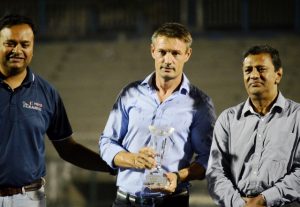 The Asian Football Confederation, the governing body for Asian football, has suspended Bengaluru FC head coach Ashley Westwood for four continental matches and has been fined the Englishman USD 5,000 for using abusive language against match officials.

In the AFC Cup – Group H fixtures of Bengaluru FC against Lao Toyota FC from Laos on Wednesday, April 27, Westwood had been sent off for dissent by the match referee and for that he had to sit outside of the substitutes bench in Bengaluru FC’s 0-3 loss to Johor Darul Ta’zim in Malaysia earlier this week.

After the initial automatic suspension by the AFC for one match, Westwood had to send a written reply to the AFC about his actions and now the AFC has taken this tough decision against Westwood and his club.

Bengaluru FC face Kitchee SC of Hongkong in the one-match Pre-Quarterfinals on Tuesday, May 25 and in this game plus two further matches, Westwood would not be allowed to sit on the bench and coach his team.

It looks a very tough decision by the AFC against Westwood, but one doesn’t know what was said pitchside that day in Bengaluru.

As XtraTime reports, I-League clubs are hoping that Indian Super League promotion will kick-off in …