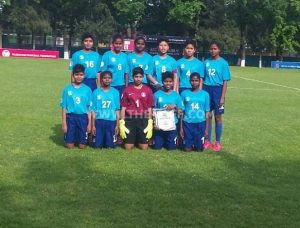 The Indian Under-14 Women’s National Team lost 1-3 against Bangladesh in their opening fixture of the AFC U-14 Regional Championship in Dushanbe, Tajikistan yesterday, April 26.

With the match consisting two halves of thirty five minutes each, the Indian eves pressed hard to take an early lead but could not succeed as the Bangladeshi defence kept them at bay. Bangladesh took the lead in the dying embers of the first half as the half-time scoreline read 1-0 in Bangladesh’s favour.

Goals in the 43rd and the 48th minute sealed the fixture for Bangladesh as they took a 3-0 lead. Although India pulled a goal back through Sunita Munda in the 50th minute, Bangladesh saw out the match as the full-time scoreline read 3-1 in Bangladesh’s favour.

The Indian eves face Nepal next in their final group match of the Championship later today.