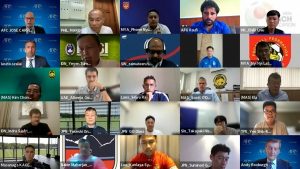 The Asian Football Confederation (AFC) organised a virtual workshop for U23 National Coaches against the backdrop of the success of the 2022 AFC U23 Asian Cup – Uzbekistan.

Following the AFC Technical Director Andy Roxburgh’s welcome address, the participants were given a brief rundown of the salient features of the 2022 edition of the AFC U23 Asian Cup ™ such as the venues, participating teams, as well as the final standings.

Before delving into the more technical aspects of the tournament, the workshop featured an insightful interview of Saad Al-Shehri, the Saudi Arabian head coach whose side were crowned champions at the tournament.

While this was the first instance of Saudi Arabia lifting the coveted trophy, this was the second successive time that the Green Falcons made it to the finals under Al-Shehri, who since calling it quits as a footballer himself, has been contributing to Saudi Arabian football by creating a steady pipeline of promising youth footballers.

Speaking of the success of his charges, Al-Shehri said: “We did not really make too many technical changes to our game from the earlier edition as the game plan had worked quite well back in 2020 and we only just fell short of winning the title.

“But we made sure to pay more attention to an overall improvement of the squad and pay equal importance in training them mentally instead of simply focusing on the physical side of the game.”

Al-Shehri, who stressed on the urgency of youth footballers getting more chances to play high level competitions against their peers, also laid emphasis on coaches educating themselves.

“While we develop our youth and prepare them for higher stages, the onus is also on us to keep educating ourselves. Football is evolving every day and we, as coaches, must continue to learn and keep up with the changes,” he explained.

The engaging dialogue with the champion side’s coach made way for a detailed conversation with members of the TSG, namely Islam Akhmedov of Uzbekistan, Japan’s Takeshi Ono, PN Sivaji of Singapore and the AFC’s Laszlo Szalai.

The discussion touched upon several factors that had been noticed during the tournament by the TSG such as a distinct change in the traditional role of attacking strikers as well as the impact that defenders have had in scoring, a tendency to play high pressing football, and the lack of goals scored from set pieces.

An informative session was also conducted to discuss some of the challenges that were faced during the tournament which was subsequently followed by an in-depth Q&A session.

“The U23 category for youth footballers is the last stage as they aspire to cross the threshold to the senior team. Hence, the prospects of a nation’s footballers are highly dependent on the coaches who develop them,” added Roxburgh before signing off.