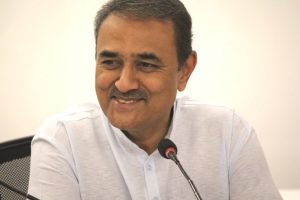 In somewhat of a surprise move, the All India Football Federation president Praful Patel announced this evening that the national football body would reward Indian badminton player P.V. Sindhu and Indian female wrestler Sakshi Malik with Rs. 500,000 (5 lakhs) each for both as they have earned India’s only two medals so far at the ongoing Rio Olympics in Brazil.

Praful Patel tweeted from his personal twitter account @praful_patel, “AIFFMedia expresses its support & solidarity to the sporting fraternity for doing India proud. We award Rs. 5 lakh each to Sindhu and Sakshi.”

“They make us proud. Their achievements inspire the entire Nation,” Mr. Patel said.

It is not clear why the AIFF, who are not in the best financial shape, would hand out such large financial rewards to non-football sportspersons.