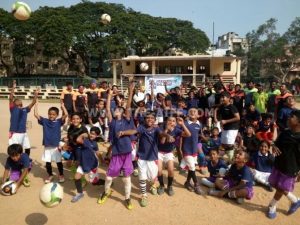 The All India Football Federation celebrated the AFC Grassroots Day amidst activity and widespread participation from all stakeholders across the length and breadth of the Country.

Keen in spreading the game among the kids the Day saw I-League Clubs, Indian Super League Clubs, State Associations, Grassroots Centres, over 70 Private Academies and others organize Festivals to enthusiase the future stars into the ‘Beautiful Game.’

It was in 2013 that All India Football Federation were nominated among the top-three AFC Grassroots MA of the Year and were conferred the AFC President’s Recognition Award for Grassroots Development in 2014.

With over 8000 kids having participated played on the special day in 2015, the AIFF targeted 12000 kids to take part and get introduced to the sport this year.