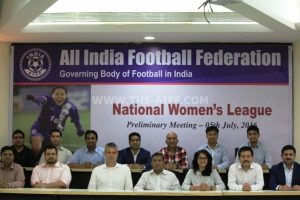 In an attempt to bolster the successful launch of the National Women’s League, which is slated to kick-off later this year, the All India Football Federation conducted a Women’s League Workshop at the AIFF Headquarters in the Capital today, July 5.

Speaking on the occasion, AIFF’s General Secretary Kushal Das said, “We believe that India has a lot of potential when it comes to Women’s Football and we want to capitalize on that.”

“We have the potential to qualify for the AFC Asian Cup and then go on to play the FIFA World Cup in 2019.”

“Keeping in mind the planned development of Women’s Football we will launch the Women’s League in October 2016 and this Workshop aims to get a consensus for successful launch of the League”, Mr. Das added.

Explaining the calendar planned for the development of Women’s Football and the National Team, Mr. Das said, “The AFC U-19 Championship will be in October and we will have a National Camp before that.”

“Next, we intend to hold the National Championship in November and December, while the final phase of the National Women’s League will be held in January/ February 2017 building up to the Qualifiers in April 2017.”

“The Women’s League will also give us an opportunity to identify talent for the Senior Women’s National Team in our quest to qualify for the FIFA World Cup”, the AIFF General Secretary stated.

“The Workshop aimed to brief the participants in how we would like to launch the National Women’s League, whilst encouraging their feedback as to how they can make the League better”, AIFF’s Technical Director Scott O’Donell told AIFF Media.

“We have done a lot of FIFA Live Your Goals programmes and we have seen the interest in the masses. We want to take this interest even further by launching the Women’s League”, he added.