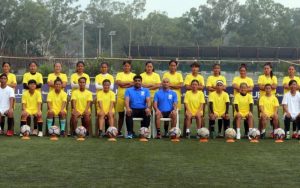 The course, which was delivered in English, Hindi and Khasi by AIFF Lead Coach Educators Shailesh Karkera and Arkibanshngain Nongrum alongside Assistant Instructor Ryum Khonglah.

The course was concluded with a football festival which featured more than 100 children in the 6-12 year age group.

Hem Kaur Sidhu, Legacy – Senior Manager from the FIFA LOC team was present at the venue and felicitated the office-bearers of the Meghalaya Football Association.