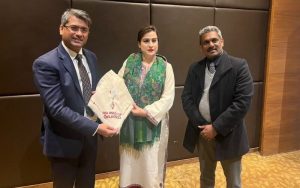 The vibrant sports culture in Jammu and Kashmir has been amply visible during the I-League matches in Srinagar, where crowds have thronged in numbers to watch Real Kashmir FC play at the TRC Football Stadium. The Federation, as part of ‘Vision 2047′, plans to develop football across the country in a bid to take Indian Football forward.

“There is no dearth of talent in Jammu and Kashmir, and we would very much like to work with the stakeholders in the region to bridge the gap between the youth and the beautiful game,” said Mr Chaubey.

“We would like the game and its infrastructure in the region to grow to a stage where competitions could be conducted in the local district levels as well.”

The local administration has expressed that it wants to create it’s own sporing heroes for the people of the Union Territory to revere in the years to come. Discussions were also held on hosting National Team camps, development of referees, youth, and grassroots, especially for women.

Dr Prabhakaran said, “The Government of India has already taken a lot of sporting initiatives with the Jammu and Kashmir Administration, we would also like to play a similar role for social causes in the state. We are also looking at a possible MoU (Memorandum of Understanding) with the Jammu and Kashmir Administration to help build capacity in the local system and take the game forward in the state.”