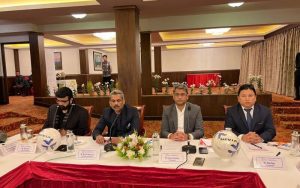 AIFF President Mr Chaubey said, “I am very happy to see everyone has put their heads together for the development of Indian Football. Both the AIFF and it’s Marketing Partners are working together with all the stakeholders, and I would like to congratulate everyone on a splendid effort for the same.”

In the first order of the day, President Chaubey suggested that new ideas must be brought in for the 2023-24 season of the I-League in order to strengthen the competition. A meeting will be held with representatives from all the clubs, with the venue and date to be decided later.

The Committee decided that the AIFF Masters programme will be discontinued from the following season.

The Executive Committee had a long and fruitful discussion on the budget and it’s several intricacies, which are aimed at taking Indian Football forward together. The committee will have another meet to finalise the AIFF’s budget on every front.

Several other committees were approved by the Executive Committee, in order to look into matters like club licensing, medical matters, legal matters, grassroots, etc.

The Executive Committee approved a number of suggestions that were earlier forwarded to it by the Competitions Committee, the first of which was concerning the Senior Men’s National Football Championship for Santosh Trophy. The legacy competition of Indian Football will be played with the final round having 12 teams (10 qualifying states, along with the Services and the Railways). The Group Stages will be placed across six groups of five to six teams each, and the group toppers, along with two best second-placed teams, the hosts, the Services, and the Railways will play in the final round. The EC also agreed with the Competitions Committee’s suggestion that the Senior Women’s NFC Qualifiers be held in December.

The format of the Santosh Trophy, the Committee decided, will be followed in all other National Football Championships at all age group levels. It was also agreed that the facilities for the players, especially in terms of travel and stay, should be improved with immediate effect.

It was also agreed that all National Youth Championships should be held between December and May.

In it’s effort to grow the game throughout the country, the Executive Committee accepted the Development Committee’s proposal to provide financial support of Rs 24 lakhs for each State Association under the banner of the AIFF. This financial assistance may be utilised by the State Associations for their Women’s, Men’s and Youth Leagues, office spaces, equipment, and Grassroots development.

The EC also approved the DC’s recommendation that the AIFF provide support to each State FA in the appointment of two key personnel for each state to hire their respective Administration Heads and Technical Coordinators.

Many other agendas were deferred to the next meeting, to be held soon, by the EC.

The members of the Executive Committee were graciously hosted for dinner by the Chief Minister of Sikkim, Prem Singh Tamang. In a meet with AIFF President Chaubey, Vice President NA Haris, Secretary General Dr Prabhakaran, Treasurer Kipa Ajay, and other Executive Committee members, the Chief Minister proposed that a Centre of Excellence be built in Sikkim. Other details on the development of the project will be further discussed between the Government of Sikkim, the Sikkim FA, and the AIFF.