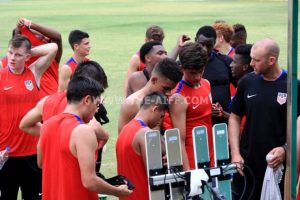 The USA Under-16 National Team participating in the AIFF Youth Cup which kicks-off today has only one objective according to its Head Coach John Hackworth.

Talking exclusively to AIFF Media on the sidelines of training session, Hackworth said the objective is to “gain experience” and test their mettle against Teams that they would not faced in competitive Football.

USA play their first match against Tanzania which is Tournament opener at the Tilak Maidan later today at 4pm. Besides USA and hosts India, South Korea, Tanzania and Malaysia are the other participating Teams in the Tournament.

“The AIFF Youth Cup will also help us to test ourselves against some good Footballing sides while allowing the squad to gain experience. This Tournament helps us to play Asian and African Nations that we normally wouldn’t play in competitive Football,” Hackworth maintained in an exclusive chat with AIFF Media.

“We are a good squad and have been playing matches every weekend as we gear up for the FIFA U-17 World Cup against Professional Teams in our Country.”

When inquired about his mission, Hackworth opined, “We are in it to win it.”

“Our objective is to win the Tournament but we will take one match at a time, and hopefully not fall prey to complacency. This is an excellent opportunity for us to indulge in the local flavour before the FIFA U-17 World Cup and we will see how our Team fares against their opponents.”

Talking about Indian Football, Hackworth stated “Head Coach of the Indian Senior National Team Stephen Constantine is my good friend and he is doing a decent job.”

“But as for the Indian U-16 squad in the AIFF Youth Cup I am yet to see them play hence I have no assessment of them as of now,” he added.

“As we have a large roster this Tournament allows us to experiment and test our Players in a different environment against different Teams. But we are still a young side and still have a long way to go,” he admitted.

“After this Tournament we go to play an International Tournament in Mexico. Our ultimate goal is obviously to prepare for the U-17 World Cup,” he informed.

“We don’t know enough about our opponents and it will be a litmus test for us tomorrow (may 15) although we will go out and play the type of Football that we have been preparing,” Hackworth mentioned in the Official Pre-Tournament Press Conference.

“We will stick to our philosophy of Football. We will be experimenting with Players and tactics which will help the young Players in our side to face a different type of competition enabling them to develop into better Players.”