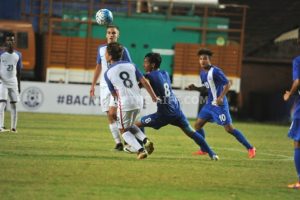 India started promisingly. But it fizzled out though they dominated, pressed and won almost every ball as if it was do or die, conceded against the run of play in the 27th minute. And thereafter, it was one-way traffic. USA took over and India conceded at regular intervals.

The United States of America outplayed the India Under-16 Team preparing for the 2017 FIFA Under-17 World Cup 4-0 in the AIFF Youth Cup at the Tilak Maidan in Vasco earlier today. USA led three-nil at half-time.

The first 27 minutes were, nevertheless, different. India played all over, attacked with purpose at a fast pace. There was always one to support the other. The ‘better attitude’ was evident.

In the 9th minute, Ninthoi’s shot was saved by Alexander Paul and with Gaston’s long throws paving danger, USA were started to get frustrated. So much so, that Rayshaun was flashed the yellow for a foul on Komal.

“In the first 27 minutes the Indians were frustrating us. We desperately needed to get the ball into their box. And the first one gave us a goal,” USA Coach John Hackworth said at the post-match Press Conference.

Understanding they were not getting anything in the middle, USA stretched it to the flanks. Andrew James who had started on the left, switched flanks and thereafter, it all changed. Keeping him silent was too much for Aimol and all the three goals in the first half were all initiated by James.

For the first two, he rounded on the right flank and played it low and behind the defence line enabling all the time in the World for William Franklin to head it in.

India were lucky as Franklin missed his hat-trick in the 41st after James had again gone past Aimol on the right and centered only for Franklin to head it into the side netting.

Nevertheless, the wait wasn’t long. The third goal was also similar, just that Chandler Vincent basted it off the rebound after the defence line had cleared James’ centre.

Changing over, the story stayed the same. The Indians faltered again when it was played behind the defence when in the 56th minute Kevin Roberto tapped in a Jake Anthony low centre — the sole difference was that this time it came from the right flank.

Two minutes later, Nicolai brought in Rakip who came in for Gaston. And then, Aman was replaced by Nonganba Singh. But it was too much of a task overturning the deficit.

In the 85th minute, Amarjit’s centre was just that inch over for Nonganba and the very next minute Alexander stretched full to saved his grounder for a corner.

USA also had a chance in added time but the towering Joshua Thomas despite towering above all to meet a corner, headed wide.

“I am happy with the attitude shown by the boys,” Nicolai said post match. “We were well organised and we are on the right track,” he added.

Both Teams play South Korea in their next match. While India play them on May 23, USA will face them on May 21.