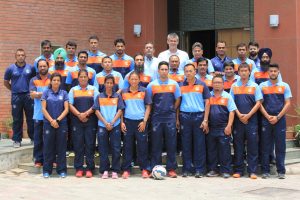 The All India Football Federation organized Advanced Grassroots Leaders Course kicked-off at the AIFF Headquarters in the Capital today, June 29.

25 members including the Technical Officers from the six states involved with the FIFA/AIFF State Development Programme and Grassroots Development Officers from each of the AIFF Grassroots States, are attending the Course, which aims to tutor Grassroots Leaders in tune with the Asian Football Confederation’s (AFC) and AIFF’s Grassroots philosophy.

Speaking on the occasion, AIFF’s General Secretary Kushal Das said, “We are looking forward to this programme as this is the step where we will take Grassroots to the next level.”

“It is very important to understand the objective of this Course and implement it as it helps us to take Grassroots Football forward”, the AIFF General Secretary added.

“The Leaders have to identify talented kids in their States and train them to perform better. That is the whole rationale behind the Course.”

“We rely heavily on the Grassroots Leaders to extend the horizons of Grassroots Football in the country”, O’Donell added.

The informative three-day Course, which is slated to conclude on July 1, is engineered to synchronize the participants in modern trends of Grassroots training and drills and is being conducted by AIFF’s Head of Youth Development Richard Hood.