AIFF’s Shaji Prabhakaran: Want to see I-League spread to every corner of India!

Press Release 2022-12-29 I-League Comments Off on AIFF’s Shaji Prabhakaran: Want to see I-League spread to every corner of India! 276 Views 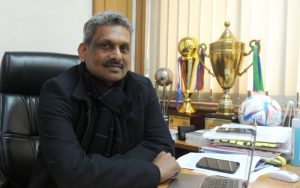 Broad basing the beautiful game across the country is one of the primary objectives of the AIFF, and its Secretary General Dr Shaji Prabhakaran feels that the I-League has a huge potential in helping the Federation reach its goal.

“We would like to see the I-League take place across every corner of the country,” said Dr Prabhakaran. “The more clubs we have from different parts of the country, the better it would be for Indian Football. Our league structure aims to have more clubs and more games at every level, and that is where this motivation comes in to see new teams play.”

The current I-League season is being played across 10 different states across the country, Dr Prabhakaran hopes to see that number increase as the seasons go on.

“Rajasthan United are having to play their home matches in Delhi this season for various circumstances. We hope that from next season they can play in their home state, which will further increase the outreach of the league,” he said. “And maybe we will be able to see more teams play in the leagues as well – maybe teams from places like Uttar Pradesh, Tripura, Nagaland and so on. That is what will make football really grow. In the end, it’s all about the talent at the local level.”

As per the new strategic roadmap of Indian Football, the winners of the I-League from the 2022-23 season onwards will have the opportunity to gain promotion, subject to club licensing criteria. The Secretary General believes that this would give the clubs in the league more incentive to put their best performances on the pitch.

“We have seen that everyone automatically tries to give their best in every game when there’s the possibility of promotion. Also, the whole preparation and approach to such a season tend to change for the clubs that really want to be at that level,” he said. “It is extremely significant that this will happen for the first time in India. We will now see tougher fights between the teams, and that will surely increase the level of competition, and thus produce better players for the future.

“It will also make the leagues more interesting for the fans. That is why we need a better league structure.”

The I-League, over the years, has been a closely fought affair, with the title being decided on the final day in seven of the last eight seasons. The ongoing league campaign has been no different, with just four points splitting the top four teams at the winter break.

“The ups and downs of the competition are one of the main pillars to create greater value for the league. That is the beauty of football and the success of any competition, and the I-League is living up to that. Last few seasons the title was decided on the final day, and we hope that the scope for promotion to the ISL will further increase the fight for the top spot this season,” he said.

The 2022-23 season of the I-League is being broadcast at a higher level with matches being telecast on Eurosport and DD Sports and streamed live on Discovery Plus. Dr Prabhakaran feels that the higher quality of the broadcast also adds to the league’s brand value in the long run.

“It’s exciting to see the quality of the broadcast in the I-League. We had some initial hiccups with certain technical issues, but it all looks good now. DD Sports and Eurosport are both broadcasting, and there is streaming on Discovery Plus, which has really increased the reach of the I-League,” he said. “But the work does not stop here. We must keep working hard on these aspects to make sure that it really grows much bigger and reaches across various parts of the country.”

Real Kashmir FC has enjoyed one of the best crowd support this season, with a packed stadium being seen in Srinagar, something that adds to the charm of football being played in front of a backdrop of snowclad mountains. Dr Prabhakaran feels that this kind of atmosphere is bringing back what was missing in the I-League.

“It’s exciting to see the matches, especially the ones in Srinagar. It is absolutely bringing back what was missing in the league the last two seasons. I hope we can reach more such regions of the country and further spread the league,” he said.