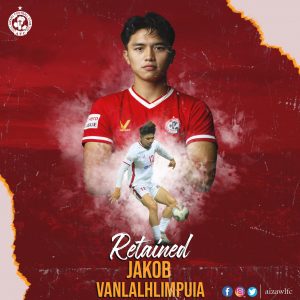 Former I-League champions Aizawl FC have extended the contract of winger Jakob Vanlalhlimpuia ahead of the 2022/23 season.

He made his senior debut for Mizoram Premier League side Chanmari FC before playing for the FC Pune City Under-18s, Reserve side and even the first team.

Jakob Vanlalhlimpuia moved with the franchise to the Hyderabad FC Reserves before playing for Corbett FC and returning to his state before the start of the last season to play for Aizawl FC.

Aizawl FC will hope that Jakob Vanlalhlimpuia plays a more imfluential role with the People’s Club in the upcoming season.