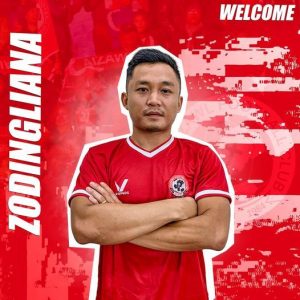 Former I-League champions Aizawl FC have announced the signing of winger Zodingliana Ralte for the 2022/23 season.

27 year old Zodingliana Ralte, who was born in Mizoram, played locally before joining then I-League side Shillong Lajong FC after the Northeastern club selected him from an Under-14 Football Festival held in Goa.

Zodingliana Ralte made his senior debut for Shillong Lajong FC, who then loaned him out to NorthEast United FC, Delhi Dynamos FC and FC Pune City for the first three ISL campaigns.