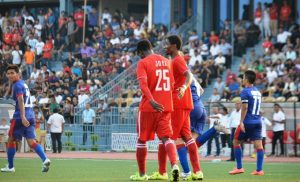 The Biblical story of David versus Goliath has always been thrown into the fray whenever an underdog takes on a challenger in the Sports World. In Indian Football, the David versus Goliath scenario could not be more aptly used to describe the Hero Federation Cup clash between ‘Champions of India,’ Bengaluru FC and relegated Aizawl FC which was eventually won by the latter 5-3 on aggregate to progress into the semifinals of the Hero Federation Cup.

In an exclusive interview with I-League Media, Aizawl FC’s metaphorical David and attacking revelation Joel Sunday, scorer of three goals against Bengaluru FC over two legs spoke at length about the Club’s underdog tag, preparations, challenges, expectations and a lot more ahead of Aizawl FC’s clash against Sporting Goa in the semifinals of the Federation Cup.

How does it feel defeating Bengaluru FC over the course of two legs?

It is a surreal feeling to defeat the ‘Champions of India’ and we are still coming in terms with the fact that we have defeated them over the course of two legs. Personally, I am very happy as all the hard work that we did in the training sessions paid off.

Where did the motivation come from?

Leicester City motivated us to upset the ‘Champions of India.’ The Leicester story inspired us to go out and the field and play as it is our last day on Earth. Each and every Player in the Aizawl FC squad took motivation from Players in the Leicester City squad as the Leicester Players became something from nothing and we wanted to show the World that we are something.

Personally, I drew motivation from Jamie Vardy and Riyad Mahrez.

Can Aizawl FC draft an underdog story like Leicester City of England and win the Hero Federation Cup?

Why not? We are united in our cause — we are confident of our abilities and with two of the best Teams in India getting knocked out (Bengaluru FC and Kingfisher East Bengal) we might clinch the Hero Federation Cup for ourselves this year. It will be a fairytale ending if we win it.

Many had predicted Aizawl FC to get knocked-out in the first round itself.

We never thought like that. We were always pushing to give our best on the field as we had a point to prove that if we can defeat giants like Mohun Bagan, we can defeat anybody. The Coach (Jahar Das) needs to be credited for the performance of the Team and it was a collective effort that got us into the next round. At the same time, a majority of local Players constitute the Aizawl FC squad and they need to be lauded as well for their hard work.

You have been a revelation for Aizawl FC in attack. Who takes the credit?

God and my teammates take the credit. I only believe in playing to the best of my abilities. Aizawl FC is not about Joel Sunday alone, it is about each and every Player. And everyone is as important as me or the Coach or the reserve Goalkeeper.

How is the morale in the squad after the win?

I have never seen this type of positive morale in my career ever. The squad is brimming with confidence and if we maintain this type of form, who knows, maybe we can progress into the Finals as well.

How big a challenge will Sporting Goa be in the semi-finals?

Personally, it will be a very big challenge for me as Sporting Goa have one of the tightest defences in India. However, I will look forward to playing against them and will give my cent percent on the field.