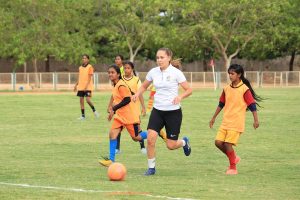 As part of LaLiga’s commitment to promote grassroot football in India, the LaLiga Foundation invited Real Betis women team captain Irene Guerrero to conduct a three-day interactive clinic for young female players and coaches of the region’s Rural Football League in Andhra Pradesh’s Anantapur district. The sessions were attended by close to 500 footballers and coaches from 20 mandals. This is the first time an international woman footballer has visited Anantapur.

On her three-day tour, Guerrero played with the female footballers at various grassroots centres and interacted with them in a fun, relaxed environment. Guerrero, along with officials from LaLiga also distributed training equipment to footballers from the 20 mandals in Anantapur.

Earlier this year through a series of videos, coaches from different football clubs in Spain took the girls through various training methods and shared invaluable tips, while promoting the virtues of playing sport, as well as empowering women to achieve and succeed. The LaLiga Foundation and LaLiga’s women’s football department have signed an agreement with the Rural Development Trust in India, known in Spain as Vicente Ferrer Foundation, with the aim of developing football in the most deprived communities of Anantapur. This will be achieved by establishing conditions in which both individual and collective talent will flourish in India. Through this joint initiative, nearly 2,000 girls and boys between the ages of 9 and 19 will get an opportunity to play sport. Apart from sport, the joint initiative will help instil discipline, self-belief and team spirit in the youngsters, qualities that will help them outside a football field as well.

Commenting on the occasion Mr. Jose Antonio Cachaza, Country Manager India, LaLiga said, “Our support to Rural Development Trust’s women’s football programme is about helping shape the lives of thousands of girls from 20 mandals in Anantapur through football. LaLiga is the best league in the world with some of the greatest players and teams, but we also take our responsibilities at grassroots level seriously, LaLiga is committed to the children of Anantapur. We have seen Jorge Lorenzo and Rafael Nadal extend their support to the Foundation in the past and we are extremely pleased to carry forward the legacy.”

“As professional player, I believe it is our responsibility to support the development of young talent,” said the Real Betis captain Irene Guerrero. “The initiative by LaLiga Foundation will fuel the passion of young players in Anantapur and build skills that will help them become the stars of tomorrow. Having fun is the most important factor in their development, but meeting a professional reminds kids that we are just ordinary people and that with hard work and dedication they too can forge a career in the game.”

The Anantapur Football League (AFL) is a rural grassroots competition that was founded in 2014/15 season conducted by the Anantapur Sports Academy. The academy is a sport for development initiative by the Rural Development Trust. Since its formation, the AFL has grown in size, expanding both its number of divisions and youth teams.

“Through this partnership, we will be able to bring football closer to girls and boys, in the rural regions of Anantapur, Andhra Pradesh. Every child has the ‘Right to Play’ and we are committed to providing children with the opportunity to participate and enjoy the benefits of playing sports,” said Moncho Ferrer, Program Director of the Rural Development Trust.