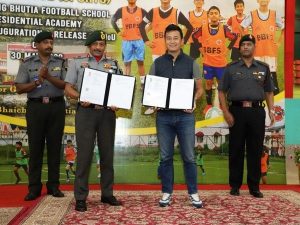 The Assam Rifles will jointly work together with the Bhaichung Bhutia Football School to set-up a joint Residential Programme.

In 2021 the school converted into a Sports School with an aim to harness the rich sports potential of the youth of the North East. An MoU was signed between Assam Rifles Public School in Laitkor, Shillong and Sports Authority of India (SAI) on January 1, 2021 as part of the Khelo India Programme. Inauguration of the School and Formal Release of MoU was done by Kiren Rijuju, then Minister of Sports and Conrad Sangma, the Chief Minister of Meghalaya, on January 4, 2021.

The Assam Rifles is using education and sports as a tool to guide the youth of the North East to build a better future. North-East India, an actual powerhouse of sports, has produced notable sportsmen, including Olympic medalists. The talent of the local youths in football is the way forward for the future of Indian Football. Assam Rifles itself has abundant talent amongst its ranks. Riflewomen RanjanaChanu of Assam Rifles is presently part of the Indian Women’s Football Team.

Assam Rifles Men’s Football recently participated in the Durand Cup 2021. Tapping this talent early will allow nurturing of young footballers who will be the future of the Country. The unique initiation of the Assam Rifles for the Residential School will thereby not only push North East youth towards sports but also boost the future of Indian Football.