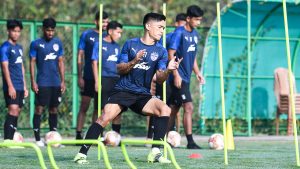 Bengaluru FC enter the business end of their Indian Super League campaign with a clash against an in-form ATK Mohun Bagan side at the Fatorda Stadium in Goa on Tuesday. The Blues – unbeaten in four games – find themselves in sixth place on the table, four points behind the final play-off spot. Antonio Habas’ side, meanwhile, are in second place on the charts; four points behind leaders Mumbai City FC.

With a lot at stake for both sides, Interim Head Coach Naushad Moosa acknowledged that his players will have to be at their best if they are to take all three points on Tuesday. The Mariners have scored twenty times this season, with eleven of those strikes coming from Fijian striker Roy Krishna.

“ATK Mohun Bagan have been playing well, have a very good attacking line that compensates for the odd goal they have been conceding and it will not be easy to get all points. They have players like Roy Krishna, David Williams and even Manvir Singh, who have done well in attack. We know how important this game is, and if we perform the way we did against SC East Bengal, we will have a good chance of coming out with the points.”

With just eight points splitting the sides in third and tenth place, the playoff spots continue to be up for grabs, and Moosa said that his players are aware of what’s at stake on Tuesday night. “The boys know how important the remaining matches are, so I don’t need to put any pressure on them. They are aware of the situation we are in, our position in the table and they are staying positive. That’s how we will approach each game, starting with the one against ATK Mohun Bagan.”

While Leon Augustine and Juanan will remain on the sidelines with hamstring injuries, Moosa confirmed that Brazilian striker Cleiton Silva faces a late fitness test. “Cleiton has a niggle and we will take a call on his participation before the game. Apart from that, there are no other fitness concerns in the squad.”

Moosa also provided updates on the availability of Dimas Delgado and Ashique Kuruniyan. “Dimas has returned to Goa but is currently undergoing the mandatory quarantine period. We will have to get him back to full fitness before he can play. Ashique, meanwhile, has joined training with the team. But we are going to be very careful with him. He’s an important player for this club, and the country, and will be in the reckoning only when the medical staff give us the green light.”

Kick off between ATK Mohun Bagan and the Blues is scheduled for 7.30pm IST on Tuesday, and will be telecast live on the STAR Sports Network, Hotstar and Jio TV.