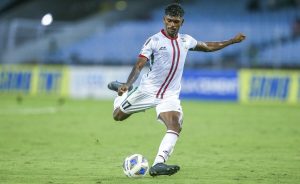 ATK Mohun Bagan’s Liston Colaco has made his side’s ambitions clear ahead of the AFC Cup 2022 Inter-Zone semifinal against Kuala Lumpur City FC of Malaysia as they aim to go all the way in the tournament.

Having lost their opening group stage match, the Kolkata giants bounced back in style to record comprehensive wins in their following two games to win the AFC Cup South Zone for a second successive season.

One name who has made headlines domestically and is now delivering the goods in the AFC Cup is Liston Colaco, with the 23-year-old scoring four goals in the group stage to ensure his side returned to the latter rounds of the competition once more.

“It is a great feeling because we are not just representing our club in the AFC Cup but our nation as well,” said Colaco, who joined ATK Mohun Bagan from Hyderabad FC in 2021.

“Playing against the best clubs and players helps us a lot in improving our quality and being more competitive on the field. We now need to win the next game against Kuala Lumpur City to move towards our goal of winning the competition.”

The current campaign marks Colaco’s second appearance in the AFC Cup after making his continental debut last year following his impressive form with Hyderabad in the 2020-21 Indian Super League season.

Last year, the Goa native came off the bench in a 2-0 opening-day win over Indian rivals Bengaluru FC before notching his first goal a few days later, drawing his side level in the 3-1 victory over the Maldives’ Maziya Sports & Recreation in what was his first start in the tournament.

A draw against Bangladesh’s Bashundhara Kings secured top spot as ATK Mohun Bagan were crowned South Zone champions but a heavy 6-0 defeat to eventual runners-up FC Nasaf of Uzbekistan in Qarshi saw their dream ended in the Inter-Zone semifinals.

“My first goal was a vital equaliser for us as we were trailing 1-0 in that game and Maziya are one of the top Maldivian clubs and a regular in the AFC Cup,” recalled Colaco.

“So, scoring that goal for my club at a crucial point against Maziya in a winning result on such a big stage made it special for me.

“The Nasaf loss was a big disappointment for the club, and we learned quite a lot from that result. However, now we are not thinking about the past and are focused on our next game against Kuala Lumpur City.”

After finishing as ATK Mohun Bagan’s top scorer in the 2021-22 ISL, as well as the top Indian scorer in the league, Colaco returned to AFC Cup action in May this year, finding the back of the net in a disappointing 4-2 Matchday One loss against another Indian team, Gokulam Kerala.

But with the centralised South Zone group stage hosted in Kolkata, ATK Mohun Bagan responded in style as Colaco netted a superb hat-trick in a 4-0 win over Bashundhara in front of the highest crowd of the 2022 tournament to date as almost 35,000 turned out at their iconic home venue, Vivekananda Yuba Bharati Krirangan Stadium.

ATK Mohun Bagan then went on to beat Maziya 5-2 to win Group D and once again claim the title of South Zone champions as they lined up an Inter-Zone semifinal date with ASEAN Zone winners Kuala Lumpur City in Kolkata.

“I have worked hard [over the past year] and I’m still working to improve myself in many different aspects as I want to help my team in all ways possible,” said Colaco of his four-goal haul in the group stage.

“A few things I have given importance to and worked on are my scoring ability, improving my strength to compete against the toughest players, and defensive skills because you require them as an attacker in modern football.”

To fans from both India and Malaysia, the upcoming clash with Kuala Lumpur City may well bring back memories of when sides from the two countries last squared off in the competition.

Back in 2016, the then-reigning AFC Cup champions Johor Darul Ta’zim met Bengaluru FC in the semifinals and, after a 1-1 draw in southern Malaysia, Sunil Chhetri inspired the Karnataka state side to a famous 3-1 second-leg victory that saw them create history for their country.

While they ultimately fell just short against Iraq’s Air Force Club in the continental finale, the campaign continues to serve as a benchmark for Indian sides.

“Bengaluru were mind-blowing in that season of the AFC Cup, and they became the first Indian club to reach the AFC Cup final,” said Colaco.

“Now we need to keep believing in ourselves and our abilities because our aim is to become the first Indian club to lift the AFC Cup.

“But we are not taking Kuala Lumpur City lightly because they beat JDT, who have won the last eight Malaysia Super League titles, to win the Malaysia Cup and qualify for the AFC Cup

“They also recently defeated PSM Makassar 5-2 to win the ASEAN Zonal final so they are in good form and we will give our best against them.”

To fulfil their objective of being crowned champions, there has been a major overhaul at ATK Mohun Bagan with a number of key ins and outs since the group stage.

The influential trio of Roy Krishna, Sandesh Jhingan and Prabir Das have all made the move to Bengaluru, while Australian David Williams returned home to join Perth Glory.

Ashique Kuruniyan and Asish Rai are among the Indian names to join the club, with ambitious acquisitions including Florentin Pogba, Dimitri Petratos and Brendan Hamill, with the latter an AFC Champions League winner in 2014 with Western Sydney Wanderers.

“Brendan is a solid addition to our team as he brings the quality and experience of winning the top Asian competition,” noted Colaco.

“We both talk while training and off the field about his experiences of playing at the top level and what we need to do as a team in order to win the AFC Cup. He is a great teammate and person, and it will be brilliant to play alongside him.”

Hamill has already featured briefly in the ongoing Durand Cup while his compatriot Petratos is in line to make his competitive debut against Kuala Lumpur City. Pogba – the brother of France’s FIFA World Cup winner Paul – starred in the recent 1-0 victory over Kolkata rivals East Bengal in the Durand Cup.

And it was Colaco, who put in a man-of-the-match performance against Mumbai City FC in the domestic tournament, who saw his cross deflected into the net for the only goal of the derby against East Bengal to ensure he is heading into the Inter-Zone semi-final in fine form.

“It was a good win because the Kolkata Derby means a lot to us and our fans,” added Colaco of the victory in Asia’s oldest existing club competition.

“We always aim to win all the domestic titles as a team and, likewise, winning the AFC Cup would be a massive achievement for all of us and our country.

“Individually, I look forward to learning and improving myself more as I want to help my team and country achieve more success.”