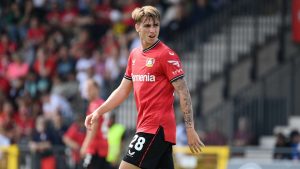 The Bundesliga club have agreed a 12-month loan with the Madrid based club.

The 17-year-old centre forward joined Bayer Leverkusen from FC Barcelona on a free transfer in the summer of 2021. Bravo scored seven goals in 14 games for the Leverkusen U-19s last season and he also played for the Bayer 04 first team in the Bundesliga and the German DFB Cup.