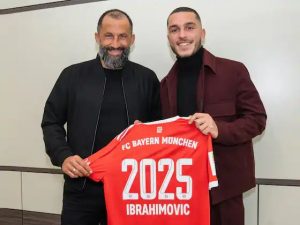 FC Bayern Munich have extended attacker Arijon Ibrahimović’s contact until summer 2025. The 17-year-old moved to the FC Bayern Campus in 2018 and was involved in the first team’s training camp last week.

Hasan Salihamidžić, FC Bayern board member for sport, said, “We’re very happy to have extended Ari Ibrahimović’s contract. He’s developed very well with us and will now be part of our first-team squad. Josip Stanišić, Paul Wanner, Johannes Schenk and now Ari: they’re all talents who we’ve nurtured at the FC Bayern Campus and of whom we expect a lot.”

Arijon Ibrahimović said, “I’m very proud and thankful. It’s a dream come true for me. I’m looking forward to the next steps at FC Bayern.”

Ibrahimović came to FC Bayern from 1.FC Nürnberg in the summer four years ago at the age of 13. He made 48 appearances in all competitions for the U-17s and U-19s, scoring 25 goals. He recently made his debut for the FC Bayern reserves in the Bavaria Regionalliga and has made two appearances in the current campaign. He also represented the German U-17 side 12 times (nine goals) and currently plays for the U-18s (two goals in six games).