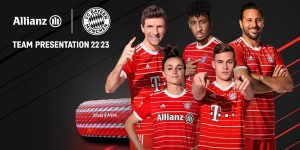 The Allianz FC Bayern Team Presentation will take place again this year to mark the start of the new season. On July 16, the team will be officially presented at the Allianz Arena, with all the newcomers who will be chasing titles in the coming season together with head coach Julian Nagelsmann.

The program will officially begin at 3pm CEST with the presentation of the team, followed by an exclusive training session from 4pm onwards.

Following the training session, we have another highlight as the FC Bayern Legends finally get to play a home game at the Allianz Arena, starting at around 5:30 pm, following fixtures in Liverpool in 2018 and Manchester in 2019. Spectators inside the Allianz Arena can look forward to a high-quality team, with the likes of Giovane Elber and Claudio Pizarro in action.

After that, FC Bayern fans can look forward to even more highlights. In addition to the fan challenges all around the Allianz Arena and the many opportunities to interact with the FC Bayern stars, the FC Bayern World Squad will play a match against FC Bayern’s U19 to round off the event.

Andreas Jung, FC Bayern Board Member for Marketing, Sponsorship and Events: “By returning to a sold-out Allianz Arena and winning our 10th consecutive Bundesliga title, we were able to end last season in a positive way. To ensure that the new season will also be successful, we will start our pre-season preparations for the 2022/23 season together with you, the fans of FC Bayern, and our partner Allianz.”

Giovane Elber *,*FC Bayern Munich Ambassador: “The FC Bayern Legends are looking forward to reuniting with our fans in the Allianz Arena and an exciting game. The team presentation is the perfect way to start the new season off with a proper highlight!”

Dr. Christian Deuringer, Head of Global Brand & Marketing at Allianz SE: “We are delighted that we are once again able to start the preparation for the new season together with our long-standing partner, FC Bayern. We look forward to finally bringing the Team Presentation experience back to as many fans as possible live at the Allianz Arena. Get ready for the new season – Get ready for the best.”