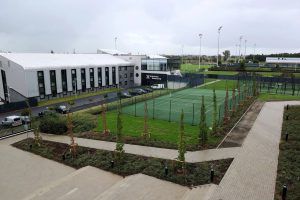 A new chapter in the history of Belgian football began on Monday, as brand-new headquarters for the Royal Belgian Football Association (RBFA), known as Proximus Basecamp, were officially opened in Tubize. The aim of this ambitious project, which was partly funded by FIFA and UEFA, is to assemble, in a single location, all the various components of the game in Belgium in a spirit of unity, inclusion and environmental responsibility.

“I’m very happy and proud that this magnificent building is now open,” said RBFA President Paul Van den Bulck, pointing to the main structure and its glass façades. “It beautifully symbolises the reorganisation process that we conducted internally. The transparency of the architecture mirrors our own transparency. We’ve worked hard on diversity and inclusion, in a spirit of togetherness. The administrative personnel and football staff are now united and working as a team, transcending differences, be they linguistic or otherwise.”

The RBFA’s administrative division bid farewell to its historic headquarters on Avenue Houba de Strooper in Brussels to join up with the sports department, which was already established in Tubize, a town located at the crossroads between Wallonia and Flanders. “Our objective is to become a modern sports organisation with a culture of excellence,” explained RBFA CEO Peter Bossaert. “To achieve this goal, we understood that the sports department had to be connected to all of the other units, and that we all had to come together.”

Refereeing has not been forgotten about either, as the decision was also made to move the video assistant referees from their mobile units to a central operating room in Tubize.

“Incorporating the VAR centre into the new premises was very important for us – it shows the importance of refereeing and how seriously the Association takes its development,” said RBFA Refereeing Operations Director Stephanie Forde. “We’ve got high-quality facilities and equipment that enable us to prepare for matches effectively and to run our own training sessions. All that helps us to work in a calmer and more professional manner on matchdays.”

Bringing all the various activities under one roof will also help to drastically reduce transport and the pollution it generates, which is in keeping with the robust environmental ambitions of the new Belgian football hub, which is targeting energy self-sufficiency.

“It’s the result of ten years of hard work,” said Frederic Veraghaenne, who oversees Proximus Basecamp. “We created this national centre from scratch, and this incredible building was the culmination of that work. It will enable us to evaluate a series of environmentally responsible innovations. We’ll have a new pitch that we’ll be able to water courtesy of a rainwater collection basin, which will allow us to be self-sufficient. We will be in a similar position with electricity, as we have our own wind turbine.”