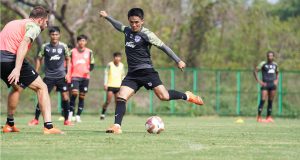 Bengaluru FC will mark the start of a new era when they take on Nepalese side Tribhuvan Army FC in a Preliminary Stage Two Clash of the 2021 AFC Cup at the GMC Stadium in Bambolim on Wednesday, April 14. The fixture will be Marco Pezzaiuoli’s first competitive game in charge of the Blues, since his appointment as Head Coach in February.

“I’m very hungry for my first game. The players look sharp and the preparation has been good. The youngsters in my team are working hard, and in our friendly against FC Goa, they performed well. They are putting pressure on the others in the squad, and that is good to see. This is an important game for us because we exited the competition early last season, and we want to reach the Group Stage this year. The first step in that direction is to beat a strong Nepalese team and I believe we are strong enough to do that,” said Pezzaiuoli, speaking to the media ahead of the fixture.

Tribhuvan Army Club recorded a 5-1 comeback victory over Sri Lanka Police in their Preliminary Stage One clash at the Dasharath Rangasala Stadium in Nepal last week, with striker Nawayug Shrestha scoring twice. The Kathmandu-based team finished the Martyr’s Memorial League in second place in their previous campaign, with Shreshta finishing top scorer for the side with six goals.

“Tribhuvan Army have quick players who are good on the ball, and they’ll be looking to focus on the counter-attacks and cause problems for our defence throughout. There are 90 minutes in the game and I believe they can create enough chances to score one or two goals, which is what we want to avoid. We want to keep the ball well, maintain a high tempo, put pressure on them and not allow them to play the way they want to, but also be wary of the counter-attacks,” Pezzaiuoli added.

Bengaluru FC have been in Goa for a little over three weeks, and have completed a month of training under Pezzaiuoli, who maintained that his side would be keen on focusing on themselves and their style of play. Gabonese defender Yrondu Musavu-King remains the lone foreign inclusion in the squad and is expected to man the Blues’ backline alongside Juanan Gonzalez. Five Bengaluru FC B players, Sharon Padattil, Muhammad Inayath, Damaitphang Lyngdoh, Akashdeep Singh and Sivasakthi Narayanan, have also made Marco Pezzaiuoli’s squad for the playoff stages.

“It was very important for the team to get physically and tactically ready, and we have been able to do that. The coach has done a good job, and all the players are confident and feeling fresh. We are raring to go because the AFC Cup is a prestigious tournament and one that is very important for us. We want to be able to have a good start,” said goalkeeper Gurpreet Singh Sandhu.

The winner of Wednesday’s Preliminary Stage Two clash will face one of Abahani Dhaka from Bangladesh or Club Eagles of Maldives in the Playoff Round at the same venue.

The match is scheduled to kick off at 7.30pm IST and will be telecast live on BFC TV, Bengaluru FC’s Official YouTube Channel.