Press Release 2022-01-28 Indian Super League Comments Off on Bengaluru FC B’s Robin Yadav: This club has made me a better person! 228 Views 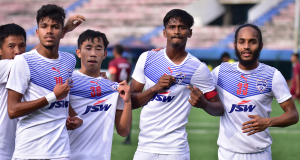 Somewhere in this conversation with Robin Yadav, it became about more than just the football. The 21-year-old says being at Bengaluru FC has meant more to him at a personal level, than a professional one. The Kolkata native is not shy of tough questions, and our first one is anything but easy. “My father passed away when I was quite young, and a lot of the responsibility fell on me and my two elder brothers. I had started playing football when I was only ten-years-old after my brother introduced me to the sport. It was a big risk to pursue a career in the sport, but my brothers and my mother stood by me. They gave me the confidence to take it on,” Robin says, speaking to us from home in Kolkata, where he is spending his off-season.

Born and raised in Sodepur, a municipality located in North Kolkata, Robin says he found a love for the sport playing with friends at a ground near his home. “I used to spend time just kicking the ball around in my neighbourhood, in front of apartments and in the local ground. The one time we played an actual game between two neighbourhoods, there happened to be a coach watching. After the game, he pulled me aside.”

It was a moment that would change the direction of his life, and Robin says he remembers it like yesterday. “He asked me what my name was, how old I was, where I lived and who else was in my family. I found out later that his name was Moloy Rudra, and soon after, I was learning football from him.” Life flew past for Robin, and before he knew it, he was wearing Kolkata colours. In 2014, he had the chance to represent his state at the U-14 Subroto Cup. Later, representing West Bengal at the BC Roy Trophy, Robin ran into the then Blues’ Head of Youth Development, Naushad Moosa.

“In 2017 we played Punjab in the semifinal of the BC Roy Trophy, and after the match, coach Moosa came and spoke to a few of us. Jagdeep, Akashdeep, Harmanpreet were all playing for Punjab at that time. After the trial in Bengaluru, I started training with the U-18 team under John Kenneth Raj.” While training with the U-18s, Robin realised that there’s a lot more to football than simply kicking it. He says at Bengaluru FC, it became about the bonds he created, on and off the pitch.

“I joined this club when I was 17, and every single day I’ve learned so much. The coaches treated us like family, and we realised there’s a lot more to becoming a footballer than just playing football. I was taught everything step by step, and I’ve become so much more of a person because I’ve come here.” He cut his teeth with the U18s, and soon enough Robin had the chance to rub shoulders with the big guns themselves, an experience he says will live with him forever. “I knew I was not going to make it into the squad that easily, but when I had the opportunity to train with the senior team, I grabbed it with both hands. After the sessions, Rahul (Bheke) bhai would sit me down and talk to me in his room. He would give me advice on how to play since we played in the same position.”

Having made it into the B Team for the 2019 BDFA Super Division League, Robin had his sights set on having a breakthrough year, but an injury in the first game meant curtains to his campaign. “In 2019, when I got injured in the first game of the League, I thought it meant the club would look past me. But they didn’t. Coach Moosa sat me down and told us that the club would support me, and they did. When I returned, the coach gave me an opportunity to play in Second Division League. I want to thank him and the club because it would have been easy for them to look around and find someone else to replace me.”

While Robin says he feels a great deal of gratitude and debt for the opportunities he was presented, he says the support he received through the time he spent in the medical room meant more than anything else. “If the club had decided to look past me then, I might not be here anymore. I had some great physios around me, Rahul, Suhas, Levin, and with them I was able to get back to full fitness. The season after, when I was made captain of the B Team, it was a proud moment. I’ll never forget it.”

The Blue Colts ended their most recent BDFA Super Division League campaign in fourth position, but Robin says the finish came with learnings. “This team is special, because we have a bond like brothers. Some of us don’t get to play all the games, but we don’t see it that way. We’re pushing each other in training and we want everyone to do well. All the players, regardless of where they’re from, choose to spend time with each other, talk and maintain a friendship that goes a long way on and off the pitch.”

While his signature on the dotted line speaks of a duty to perform on the pitch, Robin says he’s a better person for making that decision. “I played in the Second Division League, played for India and have got opportunities to train with some of the best players in the country at this club. I couldn’t have even imagined this five years ago. But more than that, this club has groomed me, and made me a better person. I am a better human being because I wear this badge on my chest, and I cannot ever pay them back for that.”