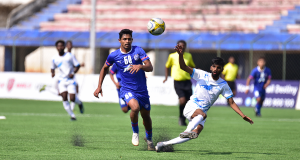 Bengaluru FC saw their six-game winning streak come to an end with defeat to Bangalore Eagles FC at the Bangalore Football Stadium on Monday. Cletus Paul’s late goal meant Sandesh Bhoite’s side dropped points for the first time this season, keeping them in second place on the BDFA Super Division table, a point behind FC Bengaluru United.

An exciting opening half saw end-to-end action as both teams tried to impose themselves on the other. With both sides having their attackers pressing from the front, the game eased into a cagey affair as the battles moved into midfield. Bengaluru FC almost took the lead midway through the half when Kamalesh put the ball in the back of the net after a well-worked set-piece, but the assistant on the far side had his flag up for offside.

Bengaluru FC started the second period strong with chances falling to Muhammad Inayath and Shivasakthi, but neither were able to find the net. Inayath came close to putting the Blue Colts ahead in the 71st minute, but his shot from the edge of the area, one that looked to be sneaking into the bottom corner, was parried by Eagles’ custodian Nihal Hussain.

Desperate to claim their seventh win on the trot, the Blue Colts stuttered at the back in possession when Robin Yadav gave the ball away fifteen yards outside the box. Eagles attacked and managed to slip the ball through to Paul, who then slotted home past Sharon Sivan to give his side a lead they would protect until the final whistle.

Bengaluru FC are back in action on February 22 when they take on Bangalore Independents FC.