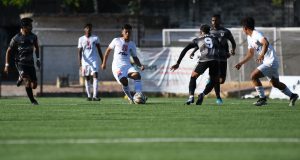 Bengaluru FC were denied the chance to clinch the BDFA Super Division League on the day, losing 2-3 to FC Bengaluru United at the Bangalore Football Stadium on Monday. Goals from Shivasakthi and Damaitphang Lyngdoh saw the Blue Colts claw their way back to level terms, but it was FC Bengaluru United who scored with the last kick of the game to take all three points and go top of the League table, following a clash that ended with Bengaluru FC defender Harpreet Singh shown a red card after regulation time.

The Blue Colts were on the attack right from kickoff, with quick passes and movement between the lines breaking open FC Bengaluru United’s defence. The first shot on target came in the 5th minute through the side’s top scorer Shivasakthi, whose effort was saved by Bengaluru United custodian Kunzang Bhutia after he was played through by Damaitphang Lyngdoh.

Against the run of play, Bengaluru United almost took the lead in the 10th minute when Malemngamba Meetei made his way into the box and found himself one-one-one with Sharon Sivan, who did well to go low and get a hand to the winger’s shot.

The Blue Colts kept knocking on the Bengaluru United door, twice coming close to getting the opening goal. First, Akashdeep Singh saw his effort from the edge of the box saved by a diving Bhutia, before Shivasakthi’s looping header – with his back to goal – sailed wide of the mark.

However, it was FC Bengaluru United that broke the deadlock when Trinidad and Tobago international Robert Primus jumped highest from a corner and headed home at the far post to put his side 1-0 up.

Just before half time, Damaitphang made a run from inside his half to the FC Bengaluru United box and saw his low shot saved by an outstretched Bhutia, to keep the Blue Colts trailing at the break.

The Blue Colts were back on level terms just 13 minutes into the second half. Shivasakthi found space between the FC Bengaluru United’s central defenders, got to Kalamesh’s through ball and placed his shot to the ‘keeper’s left to make it 1-1.

It took less than five minutes for FC Bengaluru United to retake the lead. From a corner, English forward Daniel Carr managed to put the ball into the far corner to put them 2-1 up.

The Blue Colts were denied a chance to restore parity when the referee refused to acknowledge Robin Gurung‘s handball in the box. However, Bengaluru FC dug deep, kept attacking the FC Bengaluru United goal and were rewarded deep into stoppage time. Unmarked at the edge of a box from a corner, Damaitphang got his header into the top corner with the ‘keeper well beaten.

The Blue Colts were then denied two more stonewall penalties, both for handballs in the box by Kiran Sarvanan and Gurung once again, with the referee choosing to ignore protests from the players and the stands.

Despite getting the equaliser late in the game, FC Bengaluru United converted the final chance of the game to lead 3-2 with virtually the last kick of the day and leapfrog the Blue Colts to the top of the table, taking the title race to the final round of the league.

Bengaluru FC take on Kickstart FC on March 14 in what will be their last game of the campaign.