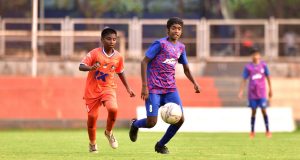 Bengaluru FC’s U-13 Academy side picked up a 2-0 victory over FC Goa in the U-13 JSW Youth Cup in Bellary on Wednesday. First-half strikes from Atul Pulipra (6′) and Ishan Chatur (17′) ensured the points for the Young Blues.

Bengaluru FC determined to put on a show in their final League stage encounter, started with a high line and had FC Goa pegged back into their own half. Only six minutes in, Atul opened the scoring with a long ranger that found the top corner.

The Young Blues turned it up a notch after the opener and doubled their lead through Ishan just ten minutes later. The forward ran down the wing before a shot that had too much for Vladmer Gomes in the Goa goal.

Into the second half, Bengaluru FC made changes as Ishan was replaced by Yajas Bafna. The forward helped the frontline and put in some dangerous crosses from the flanks. Atul and Joel Sudarshan were linking up well in attack and almost scored Bengaluru FC’s third goal. Atul’s cross found Joel, but the latter’s shot on the bounce was comfortably collected by Gomes.

FC Goa made changes to add to their backline and kept Bengaluru FC at bay for most of the second half.

This result meant that Bengaluru FC finished third on the table with seven points, while the Gaurs finished in fourth place. The Bengaluru FC U13 Boys next face FC Goa for third place in the U-13 JSW Youth Cup on April 29 at the same venue.