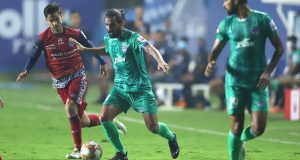 A second half fightback from Bengaluru FC went in vain, as Naushad Moosa’s side ended the Indian Super League season with a 2-3 defeat to Jamshedpur FC at the Tilak Maidan on Thursday. The hosts scored thrice in the first half through Stephen Eze, Seiminlen Doungel and David Grande before Bengaluru FC pulled two back on the other side of the break, through Fran Gonzalez and Sunil Chhetri.

It was the hosts who had the first chance of the night when Isaac Vanmalsawma’s cross was headed straight at Ralte by Grande with just four minutes on the clock. Bengaluru FC’s first chance came with a quick counter-attack as Ralte’s long ball found Chhetri, who squared the ball from the edge of the box to Udanta Singh but Rehenesh managed to get a hand to the winger’s first time effort.

The Blues were left to rue the missed chance as Jamshedpur FC broke the deadlock only moments later, when Aitor Monroy’s free-kick was headed home by Eze with Ralte unable to collect having come off his line. Jamshedpur FC then doubled their lead just past the half-hour mark through Doungel, who skipped past Ajith and placed his shot past Ralte and into the far corner.

Bengaluru FC attempted to regroup but were pegged back once again when Jamshedpur FC added a third. Just four minutes before the break, Monroy was the provider once again when his set-piece from the right flank was nodded home by David Grande to make it 3-0 to the hosts.

Looking to get back in the game, Moosa made two changes at half time as Ajith and Muirang were replaced by Erik and Fran. Bengaluru FC’s first effort at goal in the second period came off Suresh Wangjam’s boot when the midfielder met Khabra’s low cross, but his shot went wide from the edge of the box.

On the hour mark, substitute Naorem Roshan Singh ran past two players down the left flank before squaring the ball for Chhetri, who scuffed his attempted shot. Two minutes later, the Blues pulled one back through Fran, who rose high to nod home Parag’s long throw at the far post.

With momentum on their side, Bengaluru FC pushed forward and soon added another. Khabra, having found himself in space down the right flank, floated a cross that was met with a diving header from Chhetri for his 100th goal in Bengaluru FC colours.

Bengaluru FC continued to dominate proceedings as they pushed hard for the equalizer. Suresh found Udanta on the left, and the winger’s effort was deflected away before Udanta’s poke at the far post from Parag’s cross was saved by Rehenesh. The final effort of the game came through Chhetri, whose effort from an indirect free kick was blocked by the Jamshedpur FC wall.

Bengaluru FC couldn’t find a way past the Red Miners’ defence, with the defeat keeping them in seventh place on the Indian Super League standings. The Blues’ are next in action on April 14, in the Preliminary Round Two clash of the 2021 AFC Cup.