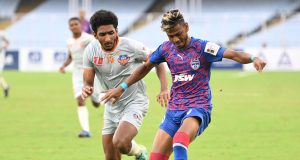 Sunil Chhetri and Sivasakthi Narayanan were on target for Bengaluru FC in a 2-2 draw against FC Goa in a Group A encounter of the 2022 Durand Cup at the Saltlake Stadium in Kolkata on Tuesday. The Blues, who took a two-goal lead into the break, came up against a resilient FC Goa side in the second period, who drew level through strikes from Phrangki Buam and Lesly Rebello.

Bengaluru FC started strong and controlled proceedings for much of the opening minutes before Ibara pulled up with an injury, forcing Grayson into making an early change, replacing the Congolese international with Narayanan.

The Blues opened the scoring through skipper Chhetri, who dispatched an inch-perfect free-kick past FC Goa custodian Hrithik Tiwari in the 24th minute to make it 1-0. Only moments later, Sivasakthi doubled the Bengaluru lead, tapping home a knock-down from Udanta Singh after Bruno Ramires had found the winger in the box with a ball over the FC Goa defence.

Bengaluru FC took the 2-0 lead into the break and came out with one more change in personnel as Jayesh Rane marked his return from injury, replacing Ramires. Grayson’s side had several chances to add to their lead within minutes of the restart, but efforts from Parag Shrivas, Danish Farooq and Sivasakthi were dealt with by the visitors.

Against the run of play, FC Goa pulled one back when Rohit Kumar’s stray pass found winger Phrangki, who rounded Gope and slotted home to make it 2-1. Rohit almost made amends at the other end, when he ran onto Sivasakthi’s pass and got a shot away but Tiwari pushed it onto the woodwork with a fantastic save.

FC Goa scored the equalizer just past the hour mark when Amrit failed to deal with a cross from the right, allowing Lesly Rebello to slot home from close range to make it 2-2. Bengaluru made further changes, with Hernandez, Faisal Ali and Leon Augustine making their way onto the pitch.

Bengaluru FC pushed forward in search of a winner, but it wasn’t to be as the visitors held fort to see out the rest of the encounter. The Blues next face Group A leaders Mohammedan Sporting at the same venue on September 2.