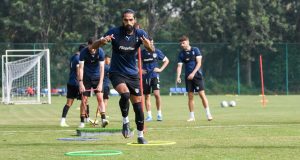 Bengaluru FC Head Coach Simon Grayson said his side were keen to climb from their position on the Indian Super League table ahead of the Blues’ clash against East Bengal FC at the Saltlake Stadium in Kolkata on Friday. Bengaluru FC, who are placed eighth on the charts, are four points behind Chennaiyin FC and nine behind Odisha FC, who occupy the final playoff spot.

“At the moment, we’re trying to win the next game regardless of who we’re playing because we don’t like where we are on the table. The aim is to get back-to-back wins, which we’ve not been able to achieve, because that’s something I think can give us confidence,” Grayson said, speaking to the media on Wednesday.

The Blues returned to the Kanteerava with a win against Jamshedpur FC a fortnight ago, but then went down 3-0 to Hyderabad FC last week. Despite their stop-start run of form, Grayson believes there have been positives to take away from each result.

“My assessment of the last game is the same as it was right after the game. We created good chances, worked hard out of possession and made a lot of right decisions. The only thing we did wrong was that we weren’t clinical enough in front of goal, and that aspect needs improving,” Grayson said.

The hosts come into the game on the back of two defeats, placed just one point behind Bengaluru FC. A Cleiton Silva strike gave Stephen Constantine’s side full points in the reverse fixture at the Kanteerava, and while victory on the night can take the Red and Golds above the Blues on the table, Grayson said that recent results and patterns meant little going into the fixture.

“In football, things can change. Stephen Constantine might throw in a curveball and play something different to what he has been doing. He might think we’re going to play a 3-5-2 or 4-3-3, because we’ve alternated on occasion. We’re respectful of the opposition, no matter who we face, but we’re not fearful of them. We know we’ll have to be at our best,” Grayson added.

Kick-off between the Blues and East Bengal FC is scheduled for 7.30pm on Friday, with telecast available on Jio TV, Disney+Hotstar and the STAR Sports Network.