Bengaluru FC finish in third spot with 6-0 win against RFYC! 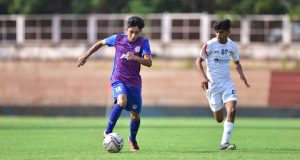 The Bengaluru FC U-15 Boys claimed third spot in the U-15 JSW Youth Cup with an impressive 6-0 victory over Reliance Foundation Young Champs on Monday in Bellary. A brace from Lalpekhlua (41′,83′) and Basudev CM (7′,22′) were added by goals from Ashik Adhikari (33′) and Newton Ningthoujam (90+2′) to seal second runners-up.

Bengaluru FC were looking to brush off the defeat in the semifinal and had their eyes set on goal from kickoff. It took only seven minutes to break the deadlock with Basudev finding the back of the net. A deep cross from Newton found the forward unmarked at the far post and a simple tap-in gave Bengaluru FC the lead.

Basudev picked up a brace shortly after with another emphatic finish. The crosses were working for the Young Blues and it was Newton who put in a dangerous ball once again, the goalkeeper got a touch but the rebound fell for the forward, who volleyed it first time to make it 2-0.

The first half onslaught continued as Ashik scored Bengaluru’s third, as another deep cross from Newton found Sparsh Desai at the far post. The striker nodded the ball back into a dangerous area and the right-back met it with a powerful header to score past Aarav Patpatia.

Lalpekhlua joined in on the action and scored a fourth before half-time. Ashik’s low cross into the box found an unmarked Lalpekhlua, who took a touch before smashing it low and into the bottom corner. Into the second half, the chances kept coming, but it looked like Bengaluru’s luck had run out in front of goal. However, persistent pressure would pay off in the dying minutes, as Lalpekhlua and Newton got on the scoresheet to score Bengaluru FC’s fifth and sixth of the game.

The result meant a third place finish for Bengaluru FC in the U-15 JSW Youth Cup, ahead of Reliance Foundation Young Champs and FC Goa.