Bengaluru FC pick up a point against Kodagu FC! 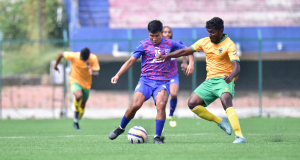 Bengaluru FC went down twice but showed enough resilience to claw their way back as they played out a 2-2 draw against Kodagu FC in a BDFA Super Division game at the Bangalore Football Stadium on Monday. Goals from Kamalesh (60′) and Robin Yadav (69′) saw the Blues share points with Kodagu FC, who twice went ahead in the game.

The Blue Colts made multiple changes to the backline that faced FC Deccan with Lastborn, Manish and Lalhmunmawia finding themselves in the playing XI. Possession was controlled by Bengaluru FC who almost found the breakthrough in the 15th minute of the game when Biswa Darjee headed the ball into the box to find Lalthangliana who took a shot on goal, but his effort was brilliantly saved by Mohammed Shibili in goal.

The Blue Colts controlled proceedings until a moment of madness changed the course of the game. Sanju Kumar sent a harmless ball into the penalty area that Dipesh Chauhan failed to collect and ended up putting it into the back of his own net to give Kodagu FC the lead five minutes from half time. Bengaluru FC failed to convert any of the chances created in the first half and found themselves walking into the tunnel a goal down.

But the Colts came out a different side in the second half and managed to level the scores when Kamalesh was found through on goal and placed it right under the arms of the Kodagu FC goalkeeper. The pace of the game increased as Bengaluru FC committed more men in an attacking position. However, Kodagu FC caught Bengaluru FC on the counter and took the lead for the second time after Sanju Kumar found Uttam Nand free straight down the middle of the park and played the perfect pass for the forward who took his chance with ease.

Bengaluru FC pushed for the equaliser and finally got it when Kamalesh was brought down in the box and won the Blue Colts a penalty which was converted by Robin Yadav who sent the goalkeeper the wrong way to level things again.

The Blue Colts looked for the winner and brought on Macarton Nickson and Omega to make a difference in attack but the Kodagu FC defence stood firm.