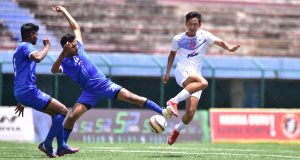 Bengaluru FC’s B Team ran riot at the Bangalore Football Stadium with strikes from Sudheer Kotikala (36’), Thoi Singh (60’, 67’) and Damaitphang Lyngdoh (65’) giving them a 4-0 win against MEG & Centre FC. The Blue Colts picked up their third win in four games.

Both sides struggled to create chances early on in the game, with the battle restricted to midfield for most parts. The first clear chance of the game fell to MEG, with a freekick that Imnaakum struck with power, only to be met by a flying Dipesh Chauhan, who tipped it over.

With less than 10 minutes to the break, Bengaluru made the breakthrough courtesy of Kotikala. An inch-perfect pass from Lyngdoh found the striker in a dangerous position, and he made no mistake from close range, smashing his effort into the roof of the net.

Into the second period, Bengaluru came out all-guns blazing and doubled their lead early on. Lyngdoh’s nod down into a dangerous area found Fanai, whose shot was saved by the MEG ’keeper, only for Thoi to tap home from close range.

Moments later, the hosts were brought down to ten men when Vishnu Vinod brought down Kotikala, who was through on goal, outside the 18-yard-box. Down to ten men, MEG struggled to keep hold of the ball, and the Blue Colts capitalized instantly, scoring twice in the span of eight minutes through Lyngdoh and Thoi.

The Blue Colts next face FC Deccan on September 29 at the same venue.