Bengaluru FC qualify for Next Gen Cup with 3-0 win over Chennaiyin FC! 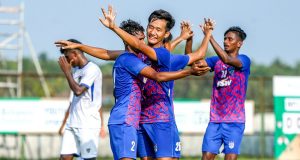 Bengaluru FC continued their perfect run in the Reliance Foundation Development League with their fifth win on the trot, a 3-0 win over Chennaiyin FC, securing their qualification for the Next Gen Cup in Goa on Tuesday. Lastborn Mawphniang (26′,69′) and Bekey Oram (67′) were on target for the Blue Colts in what was a commanding performance from Naushad Moosa’s side.

The Blue Colts opened the scoring close to the half hour mark when Amay Morajkar took a shot from distance. Aided by a deflection, the ball fell for Bekey, who was fouled by goalkeeper Devansh Dabas. Handed the advantage with Lastborn ready to pounce, the defender slotted the stray ball into the back of the net.

Bengaluru FC almost doubled their lead from a set-piece routine only moments later. Bekey floated a ball into the box and Robin Yadav headed downwards into the danger area, Damaitphang Lyngdoh leapt highest and nodded it goalward, but it came back into play off the woodwork.

Bengaluru FC kept the pressure on their opponents and scored their second in the 67th minute. Rahul Raju’s shot from distance was parried away by Devansh, and Thoi Singh pounced on the rebound. The winger found Bekey unmarked in the area, who found the net with a backheeled finish.

Lastborn added his name to the scoresheet once again when Bekey turned provider, this time with a pass that found the defender unmarked in the area to tap home from close range.

The victory meant that the Blue Colts have picked up maximum points in the RF Development League, winning all of their games so far. The result also guaranteed their finish in the top two of the tournament, and qualification for the Next Gen Cup.

Bengaluru FC face Jamshedpur FC next on May 7 in Nagoa.