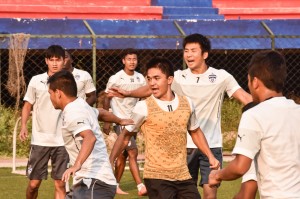 Ashley Westwood said his side would fall back on their good run of form as Bengaluru FC shift focus to the AFC Cup when they host Ayeyawady United FC at the Kanteerava Stadium, in Bengaluru, on Wednesday.

The Blues only just played on Sunday, beating League title rivals East Bengal 3-1 and are on the cusp of a second championship in three years should they triumph over Salgaocar at home on the 17th prompting questions on the kind of team Westwood would roll out.

But while the gaffer did hint at changes, he said it was something he’s done all season. “We always chop and change. I don’t think we’ve used the same side for two consecutive games this season. We have watched a lot of videos of our opponents and will look at our players who are fit. We will rotate and settle on a formula that will help us win,” said Westwood while addressing the press on Tuesday.

Bengaluru are on three points along with Ayeyawady United and Lao Toyota while reigning AFC Cup champions Johor Darul Ta’zim continue to lead Group H with 9 points. Incidentally, Bengaluru’s only win of the campaign has come against Ayeyawady whom they beat 1-0 in Myanmar last month. With a strong Johor side taking on Lao in tomorrow’s other game in the group, a Bengaluru win will see them take an important step in their bid to qualify out of the group.

Westwood, however, refused Bengaluru to be considered favourites. “They are a decent side. When we beat them at home it was the first time they lost as hosts in somewhere around three-and-a-half years. They are a technically good team and are capable of winning. We surely won’t be going in as favourites. We have got a chance and that’s all you can ask for,” he said.

Both sides have a player missing owing to suspensions. While the Blues will be without midfielder Michael Collins, Ayeyawady will be without central defender Hanson Samuel.

While the calendar has been a cramped one, Westwood refused to use it as an excuse to focus on just one tournament. “We are trying to win the League and we want to go one step further in the AFC Cup. Last season, we made the Round of 16 but went behind because of a penalty that wasn’t. This season, we want to go as far as we can.”

The game kicks off at 7pm.

As XtraTime reports, the fan clubs of Mohammedan Sporting Club came together to celebrate the …