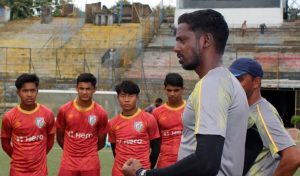 Winning streaks are a thing of wonder. One win leads to another, and the team rides the momentum to keep winning one after the other.

Most recently, the Senior Indian Men’s Team experienced such a streak back in 2016-17, winning nine matches on the trot, an effort that saw them win the Tri-Nation Cup, helped them qualify for the 2019 AFC Asian Cup, and defeat higher-ranked sides like Puerto Rico.

The India U-16 team are also on a similar roll in recent months, when they have even managed to surpass their senior counterparts, winning 11 matches on the trot – the last of which was a memorable 6-3 triumph over Turkish giants Fenerbahce SK.

They now carry this winning streak into what will be the most important set of matches for Head Coach Bibiano Fernandes and his boys – the AFC U-16 Championship Qualifiers which kick-off in Tashkent from September 18 where India have been pitted in Group B, alongside hosts Uzbekistan, Bahrain, and Turkmenistan.

“We are happy with how the team’s preparations have gone and we head to the AFC Championship with confidence and a positive a mind-set,” Fernandes said. “The target is to qualify from the group. As a team, we are mentally ready for the challenge.”

While the U-16 boys have been on a roll, it was not always the case for the team and its coaching staff. In fact, in the initial stages of the formation of this team, earlier this year, the results were not exactly showing for the youngsters.

Their first ever tournament together was the Torneo Del Nazioni, an invitational event in Italy. Out of the five matches that they played in Italy, Bibiano’s boys could only muster a 1-0 victory against Buriram United U-17 side and a 2-2 draw against North Korea U-16 side. Matches against Thailand U-16, China U-17, and Bangkok Glass U-17 resulted in narrow defeats.

However, this did not weaken the resolve of the coaching staff, who were looking to build the side into a formidable unit. “The Italy trip happened during the early days of our camp. Although it helped to establish the system we wanted to play, the team has undergone a lot of changes since then,” informed Bibiano.

In fact, only two players that were in the Starting XI in the 0-1 defeat against Bangkok Glass FC in the Torneo Del Nazioni were on the field during India U-16’s match against Fenerbahce.

“Over the course with what have been a really good camp, these players have been able to adapt to the system. We have gone from strength to strength,” said Bibiano.

These results have clearly turned over since the team went on their exposure trip to Thailand, where they won all of their four matches, before continuing that run in the SAFF U-15 Championship in Kalyani, winning five more. Finally, the boys made their way to Turkey, where they earned victories in two more friendlies against Keciorengucu FC and Fenerbahce SK.

BUILDING FROM PAST EXPERIENCES

Bibiano was in charge of the previous batch of U-16 Boys, who got the joint-best result for the country in the AFC U-16 Championship Malaysia 2018 last year, when they made it to the quarterfinals in Malaysia, before losing out to South Korea 0-1.

However, it is from the experience of the 2018 edition of the tournament, that Bibiano and his coaching staff has gone forth, building next batch of U-16 players. “The last time we went to the AFC U-16 Championship, scoring was a big issue. This time we have focused a lot on improving on that aspect,” he maintained.

“We have been telling the boys a very simple mantra – to win games, you need to score goals – and the boys have been doing it well. Hopefully they can continue the good work.”

Indeed, the U-16 boys, in the 2018 tournament, had scored one and conceded as many in four matches, keeping three clean sheets. On the contrary, the current batch has netted 58 goals and let in only seven in the last 11 matches.

The key to such results, Bibiano explains, is that every member of the playing XI contributes in the play, be it attack or defence.

“The forwards are the first line of defence – this philosophy is an integral part of modern football and we have tried to incorporate the same in our team as well. The credit for the good numbers on both sides of the pitch, goes to all the players equally because in our team, each player contributes offensively as well as defensively,” he quipped.

One concern that has bubbled under the surface after the Fenerbahce game, however, was that after keeping clean sheets in seven consecutive matches, they boys conceded three in one game.

“To be honest, I am not too concerned about the goals we conceded. Except for a penalty we conceded (and was subsequently saved by goalkeeper Aman Kumar Sahani), the goals they scored were all stunning finishes, highlighting the quality of the opposition. There was not much our defenders or GK could do about it. They have been doing a great job and I am sure they will continue to do so.” 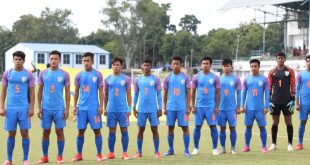